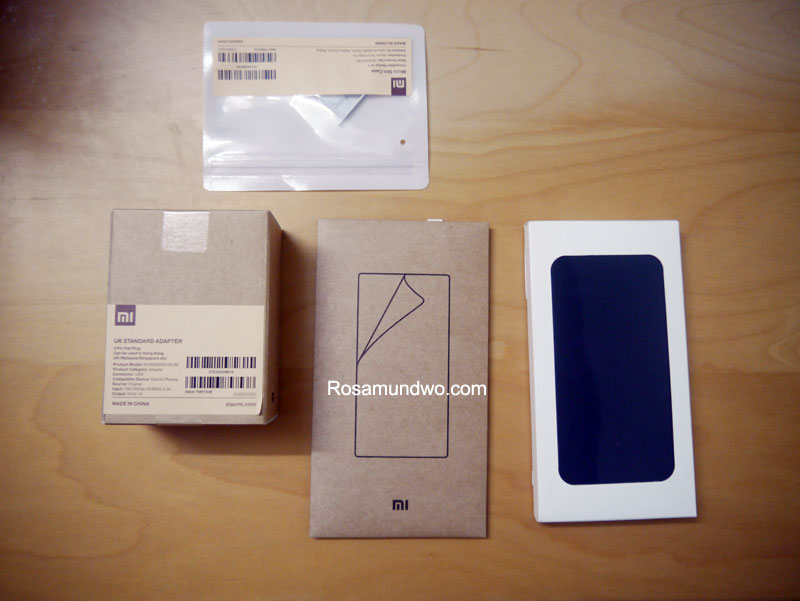 Just received my Xiaomi mi3 on Saturday delivered by Fedex (unboxing xiao mi3 in malaysia). Bought this China made smart phone via Xiaomi Malaysia at RM889 for phone and chose the Mi3 Accessories Essential Bundle include Mi 3 Screen Protector (Anti-Glare) Anti-Glare and Mi 3 Flip Protective Case Black for RM36 comes to total amount of RM925. Other than that, UK Standard Adapter White and Mi 3 Micro SIM Card Adapter Metallic Gray are included in the box.

A little bit about Xiaomi:

* The company’s founder and CEO is Lei Jun, China’s 23rd richest man according to Forbes.

* Xiaomi’s MIUI firmware which is based on Android and resembles Samsung’s TouchWiz and Apple’s iOS.

* Some of Xiaomi products are manufactured by Foxconn, which also assembles Apple’s iPhones and iPads.

* On 7 March, Xiaomi Mi3 sold out within 2 minutes of the opening day sale in Singapore

* Xiaomi’s Mi3 sold out in 17 minutes in Malaysia

* If you love taking pictures, Mi3 main camera’s resolution is as high as 13MP, using BSI Sony technology with an aperture of F2.2 and 2.8mm wide-angle lens. Two LED Flash are also present to brighten up the shots. Meanwhile, Mi3 front camera can shoot 2MP pictures and is equipped with gender and age detectors which help to decide an appropriate effect for those who are into “selfies”. Both cameras can record 1080p video at 30fps.

*Xiaomi Mi3 Lithium-ion battery with a capacity of 3050mAH is able to provide power up to 500 hours. Music can be played up to 50 hours, while talk-time period is 25 hours and 3G data surfing is 20 hours.

update: This problem is solved by Settings > Display > Glove mode

Thanks so much Aniki (view comments below blog)

2) Too bad Xiaomi Mi3 Malaysia only have grey color phone only.

Here’s my selfie picture, great resolution, in this picture using filter i’ve reduce to 500 px from 1080px. It’s great for female especially when you’re snapping selfie photo, it will show you which angle reflect the most younger looking with age indicator. I’m 35 yr old and look at my age, no make up. Lol,

With this really attractive price RM889 (below RM1k), with such great specs, and such camera resolution, one word to describe it EXCELLENT! (Where else can you find such price with such spec right?)

But if you’re waiting for Iphone 6, it’s coming either in June or September 2014, or if you prefer Sony Xperia Z2 it’s expensive around RM2399. If price is your concern, or simple doesn’t want to spend more than 1k on phone, get Xiaomi, great spec, great camera, great phone. Even Steve Wozniak (the man behind Apple, together with Steve Jobs developed Apple Inc) is now using Xiaomi Mi3 smartphone in his daily basis.

Payment is via paypal connected with your credit card. Get ready your address. Choose Bundle or Phone Only. If you wanna buy power bank, then click on power bank tab. There isn’t much time to click on power bank and phone. So be wise in your timing. After items added to cart, it will show (1), click on Orders, and make your payment.

Mi3 restocked to 6000 sets while powerbank 5000 unit. They won’t be enough for everybody so you need to be really quick!. Since a lot of people will be surfing on that one site xiao mi malaysia, so server will be overloaded.

Maxis has revealed on its official website that it will be taking pre-orders for Xiaomi Mi 3 on 30 May 2014.

“According online media news, the Xiaomi Mi4 is scheduled to be released end of this year.

Being the next-generation flagship phone, we can expect the Xiaomi Mi4 to use latest and most powerful hardware, but it will also use sapphire crystal glass for its display.

Not only Apple and Xiaomi, but many other phone companies are also planning to use Sapphire Crystal Glass on their high-end devices.

The main feature of Sapphire Crystal Glass over the more dominat alternative Corning Gorilla Glass is, that it’s much more scratch resistant.”

Update: How to insert sim card into Xiaomi Mi3