Half mix Mexican and Filipino, Gloria Shuri Nava 25 years old from San Jose, who is a youtube celebrity, part time actress shows how an overweight woman could get a hot and slim boyfriend without any difficulties.

Her 22 year old boyfriend, Ali stands at 177 cm tall, with blue eyes, dimpled smile and muscular body. Her boyfriend could have a sexy woman as his companion but he chose her despite of her huge figure.

I’m Fat, My Boyfriend is Handsome…. So What? Gloria says..

At times, Gloria will get all sorts of ugly comments from her Youtube Channel, Glowpinkstah, in which she reviews beauty products and shares about her life to more than 250k subscribers. According to her, most are supportive fans, only a minority bullies her.

Being overweight her whole life, she tries to ignore those remarks and get on with her relationship which she couldn’t care less of what the society thinks.

In one of her videos, they talked about how they met each other back in 2009, after Ali who currently lives in Glasglow Scotland move to California to get his PhD in clinical psycology, saw Gloria’s video and they began to instant message for two and half years, thus developing true love online, knowing what the other party look like.

They had been on a long distance relationship for 18 months and recently announced their engagement marriage. 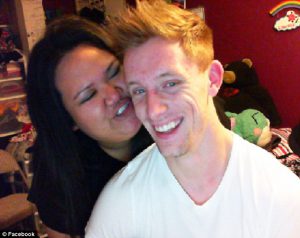