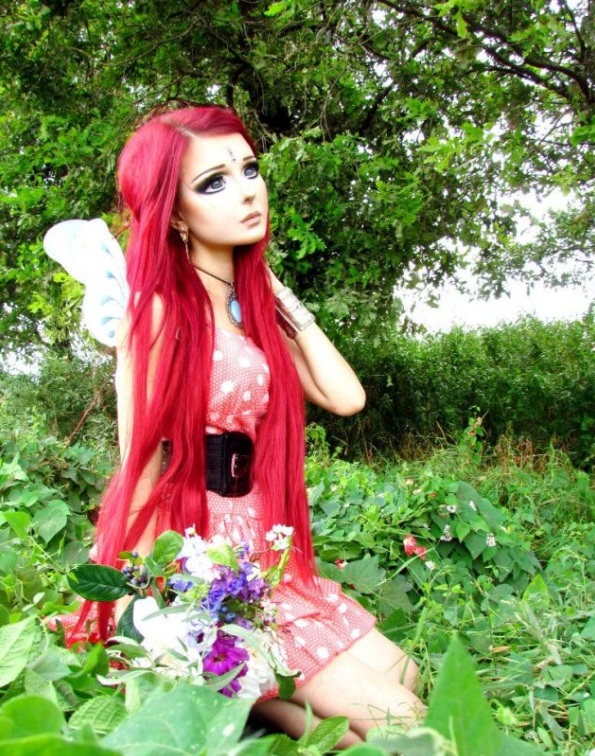 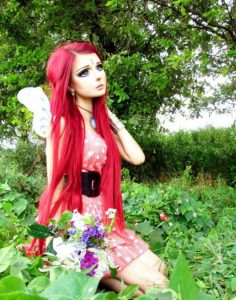 Incredible big eyes for an anime makeup by Anastasiya Shpagina (aka Fukkacumi) from Ukraine. Worked as a hair stylist, the 19 year old Anatasiya uses an extreme makeup technique and costumes to transform herself into a human anime character. “I’m not a like a doll, a doll is like me,” she writes on her vk.com (a European version of Facebook) page. Her Facebook fan page show a beautiful young woman with deep crimson hair.

In order to get a this real touch of makeup for her eyes, it took her an hour!. According to her, she would like to have surgery to reshape her eyes and nip in her waist to achieve a more anime lookalike one day. To fit into such character, she is reported to weight only 90 pound or 40.8kg. Her VK page is posted with images that inspire her such as dragonflies, flowers, butterflies, tiny deer, and other woodland creatures, but her true muse is Valerie Lukyanova, the 21-year-old who sparked controversy in the spring by using plastic surgery and photo retouching to become a real-life Barbie.

Both of them live in Odessa, and according to images posted on VK, they appear to be very close friends. Lukyanova is said to be the most famous woman on the Russian Internet, but Shpagina may have been more famous. More than 800,000 people have viewed her YouTube Flower Fairy Tutorial.