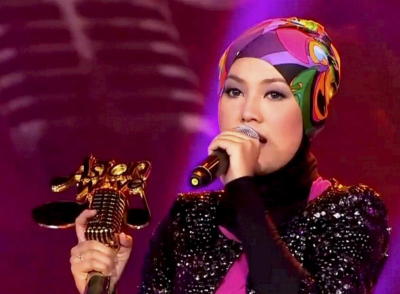 As a Malaysian, i would like to congrats Shila Amzah for winning 1st place in Asian Wave 2012 competition held at Shanghai, China. Other than Malaysia, there were also countries such as Japan, Korea, China, Thailand who participated in the Asian Wave. The 22 year old Shila sang confidently in Mandarin and amazed all the judges with her powerful voice. Dressing in our malaysian costume and winning the competition is really something all artistes should be proud of. Congrats again!.

Shila Amzah proves to all that language isn’t a barrier, therefore our government should build more Chinese school to enable their citizen to glorify our country Malaysia. Let’s add Mandarin language and all other useful languages to our education system.

Let’s enjoy her performance at final with the song “征服”

Showing her Malaysian pride to the predominantly Chinese audience, she sang a cover version of Jaclyn Victor’s Gemilang, followed by her rendition of Bruno Mar’s Grenade. But it was her third song, Zheng Fu, a Mandarin number by Chinese star Na Ying, that clinched her the title.

Her performance left the host speechless when he said, “Wow. Oh my God.”

One of the judges, famed Chinese composer Gao Xiaosong, praised her performance, saying: “You gave me goosebumps. You broke my heart.”

Shila could not control her emotions when the studio audience leapt to their feet in applause for her.

She cried tears of joy when famed Cantopop legend Alan Tam handed her the trophy.

The panel of judges, comprising some of the region’s top artistes, including Japan’s bossa nova queen Lisa Ono, K-pop star Lee Min-woo, Malaysian singer-composer Eric Moo and Hong Kong celebrity Hacken Lee, also sprang from their seats to give her a standing ovation as Shila choked back her tears.

Her father, 1980s pop singer Amir Hamzah Salleh better known as ND Lala beamed with pride when he was shown waving at her in the studio.

“I’m proud to be born in Malaysia. I thank God. I would like to also thank Asian Wave for letting me be a part of this competition.

“To all my fans, thank you for making me feel so blessed.

“I will be here more often and I want to learn more Mandarin because it is a beautiful language,” she said after winning.