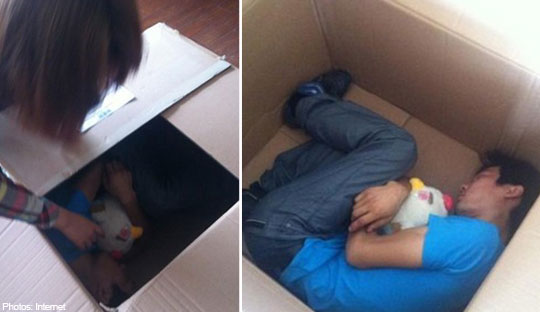 A chinese man from ChongQing tried to hide inside the box to be courier to his girlfriend’s place but was later found unconscious suffocated inside a thick courier box.

Romantic surprise turns into nightmare. Hu Seng had asked his friend to tape him into a box and ship himself via a courier service to his girlfriend, Li Wang. But during the delivery, the courier company mixed up the address with another delivery, only delivered to her after 3 hours instead of 30 minutes.

He doesn’t want to spoil the surprise by calling for attention. How sweet and stupid!. It was too thick for him to poke a hole for oxygen.

However, they found Mr Hu unconscious and looking pale upon opening the package.

Subsequently, paramedics were called over to her apartment to revive him.

He admitted, “I didn’t realise it would take so long.”

The courier company said they would not have accepted this delivery if they had known there was a person inside.

The spokesperson said that even for animals, a special container would be used so they can breathe properly.