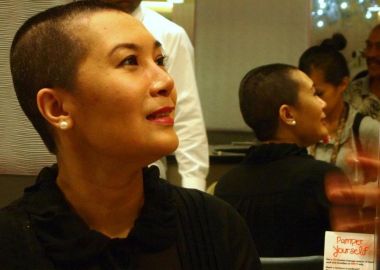 Bald is BEAUTIFUL especially for someone like Ras Adiba, NTV7 newscaster for supporting such good cause for cancer awareness organised by MAKNA (National Cancer Council of Malaysia) Jom Botak (jombotak.makna.my).

She has pledged to raise RM50,000 in donations by going bald in this charity campaign and she’s ain’t stopping because she has family members who died from cancer, her late stepfather died of cancer,  uncle is a cancer survivor and friend who gone through it.

Personally, i don’t think Media Prima who owns NTV7 should stop Ras Adiba from appear on national television just because her head is bald. There are lots of wigs available in the market, shorts, curly and long with variety of colors. And what’s this statement suppose to mean “We can’t put a bald person on air, especially for news and the anchor is a woman. We have to upkeep a certain look and feel”

Do you mean woman cannot be bald and men can be bald to appear on air?

And in your other statement “A wig, which we were against because it would look strange for her to appear on air in a wig and then in public with a shaved head,”.

I don’t see why she cannot put on a wig and appear natural. If we viewers can accept her new look, why not NTV7. Afterall, we are the ones who view her on air.