Another road crime real life story posted by Lina Teoh in her Facebook today. Please read and share this.

Ladies pls beware – this happened to me at 10.30am this morning. Coming out of the Jln Duta round about going towards Jln Kuching, a motorbike hit the front of my car from the left. As I was driving very slow, almost stationary the impact was almost nothing but still the motorcyclist fell down and grabbed his leg like he’d been hit and injured, which was impossible because he hardly touched my car! After parking at the side of the road I (yes stupidly) got out of my car to see if he was alright. He then started yelling at me about all the damage I had done to his bike even though there was no proof of even a scratch on my car or of any debris on the ground. He straight away said I have to give him RM300. I had already RM50 on standby to give him in exchange for a peaceful outcome even though it wasn’t my fault in the first place and I knew I was being taken for a ride. He continued to argue with me saying what about his medical bills etc even though he had no injury what-so-ever!! Then another motorcyclist stopped and asked me what happened, I told him and he said “Mam if it wasn’t you fault then you don’t have to pay him, just leave”. And he was right, so I walk towards my car to go. Then this new guy starts following me closely asking me where I live and can he have my phone number. I suddenly feel more threatened by this new guy than the ranting original guy that hit me!! I try to get into my car and he holds open my door trying to stop me from leaving. Thankfully I manage to yank the door shut and drive off! Already quite freaked out I hit a traffic jam and am stuck at the PWTC exit when the first guy that hit me comes from behind and parks his bike in front of my car, gets off and starts screaming at me and hitting my car, trying to break my window. I wind down my window slightly and throw some money out to distract him. He hits the back of my car with a huge thick chain as I drive off and I spend the next 5 minutes driving through as many traffic free streets as I can find to escape him. Thankfully I am now safe and managed to escape unhurt BUT in hindsight there were many things I did that I shouldn’t have done. Firstly TRUST NO ONE! As sad as this is to say, toady I really believed it 🙁 I didn’t think clearly enough about what I should do in this situation. So I share this story with you in hope that you will think about what you would do in my situation and hopefully you will be better prepared than I was. Pls drive safely ladies and beware of your surroundings 🙁 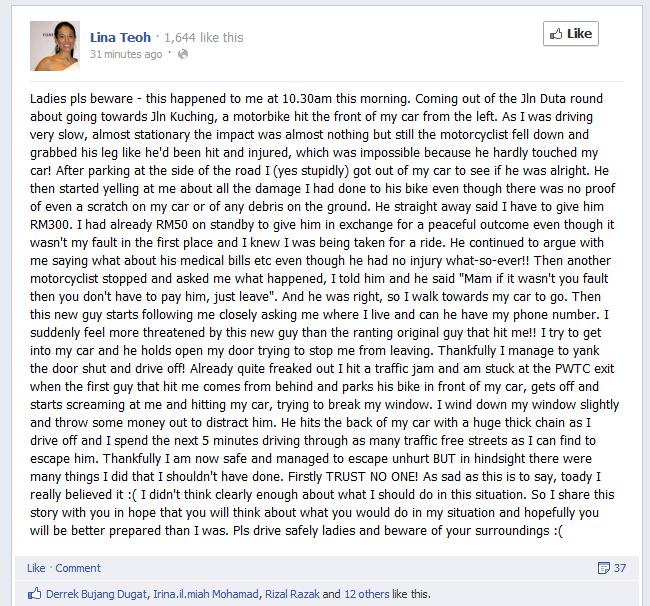