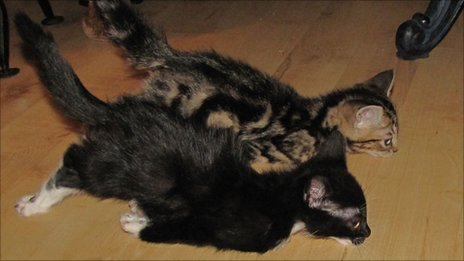 It’s commonly found in goat, unfortunately this syndrome are found in both kittens Charlie and brother, Spike. According to the Royal Veterinary College, there are 6 reported cases found outside of UK, 2 from US and 4 from New Zealand.

Edward Scarr who is the owner of the these kittens said he noticed Charlie couldn’t stand properly after he brought Charlie back home and something wasn’t right, at the slightest sound, he will collapse into a paralysis condition. Edward decided to return Charlie back to the pet shop and was told Charlie’s brother Spike had been returned with the same condition too and he was going to be put to sleep. He ended up finally taking both kittens home instead.

“Charlie and spike were two kittens with myotonia congenita, otherwise known as ‘fainting goat’ syndrome. at the slightest sound or movement, the kittens responded by collapsing and falling into a rigid paralysis which lasted about a minute before they returned to normal.If a pin dropped they dropped too. This condition had hardly ever before been diagnosed in a cat, is rarely found in dogs and is more common in goats. The kittens were able to walk, but they could not run or jump. sadly they both died from this condition in October 2010”