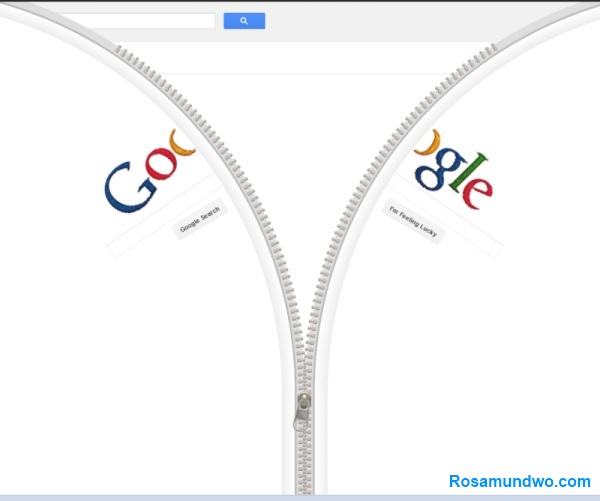 HUGE Google Zipper Doodle! That’s what you notice on Google’s background Homepage site today. If you haven’t seen it yet. Go to Google’s homepage and play with it, by zipping it up and down.

It’s a cool idea from Google. Who would have thought you can zip a website this way. It’s definitely awesome and cool looking interactive ways to browse a search engine.

In fact, this huge zip on google’s homepage is to commemorate zipper inventor “Gideon Sundback”, whose 132nd birth anniversary was marked on Tuesday.

Keep up the good work, GOOGLE.

Here’s a video on Google’s zipper

Sundback increased the number of fastening elements from four to ten per inch, creating small teeth. He faced two rows of teeth opposite each other and added a slider to pull them together.

The United States Army applied zippers to the clothing and gear of troops during World War I. By the late 1920s, zippers could be found in all kinds of clothing, footwear, and carrying cases. The industrialist B. F. Goodrich coined the onomatopoeic term “zipper” in 1923.

Sundback also developed the manufacturing machine and process for the new zipper. The “S-L” machine took a special Y-shaped wire and cut scoops from it, punching dimples to create teeth. Within the first year of production, the Universal Fastener Company was manufacturing hundreds of feet of fastener per day.

Sundback was born in 1880 in Sweden and immigrated to Canada and eventually America.  Sundback improved Whitcomb Judson’s 1851 patent for the Clasp Locker, working for Judson at his Universal Fastener Company in St. Catherine, Ontario.  Sundback died in Meadville, Pennsylvania.