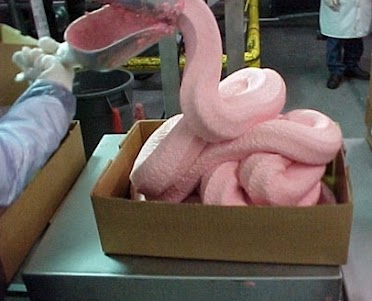 McDonald’s confirmed it had eliminated the use of ammonium hydroxide, an ingredient found in fertilizers, household cleaning products, and some roll your own explosive into its hamburger meat.

Could it be because celebrity chef Jamie Oliver gets their attention and had influenced their decision to remove this ingredients in their meat?

This week, McDonald had acknowledge to stop using this pink slime – made from inedible scrap meat with chemical a few months ago.

For your information, beside using as household cleaning and fertilizers, the compound release vapors are highly flammable and it’s widely used in food industry as anti microbial agent in meats and also in leavener in bread and cakes products. True and it’s actually regulated by US Agriculture Department classified these as “generally recognized as safe”??

Jamie Oliver had done a great job in running his campaign in April in his segment “pink slime” on one of his TV show, Jamie Oliver’s Food Revolution.

In a statement, McDonald’s clarified that they had stop using “select lean beef trimmings” – scrap meat soaked in ammonium hydroxide and ground into pink paste at the beginning of last year.