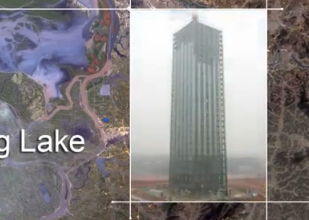 Zhang Yue, the Chinese tycoon built 30 storey energy saving prefabricated building in just 15 days in Beijing, China. The 5 star T30 Hotel building at Dongting lake, Hunan opens on January 18 and had become a hit among netizen after time lapse video was posted online showing how it was constructed by 200 workers in just 360 hours.

The billionaire CEO of Broad Group air conditioning company, said the speed which his buildings go up reduces waste of materials and energy. He added, his building only uses energy saving lighting and would becom his biggest business in the future 2013.

“We need to speed up our environmental thinking. We need buildings like this all over China,” Zhang said of the pre-fabs , which he claims are six times greener than most European buildings.

“China is 20-40 times more polluted than Europe and that’s hurting our health and will offset the economic benefits of our growth,” added Zhang, who won a UN Environment Programme ‘Champions of the Earth’ award last year.

In 1988, Zhang founded Broad together with his brother, Zhang Jian. Together, they revived an old energy-saving technology for non-electric air conditioning , and had sold in 75 countries.

All the hotel’s prefabricated parts originated and made from factory owned by Broad Group in Hunan, employsing 10,000 people, using steel, glass and insulation sourced inside China, Zhang said. The group now owns 3 such factories in China, and plans to expand to 40 to further promote its patented sustainable building model at home as well as to abroad.