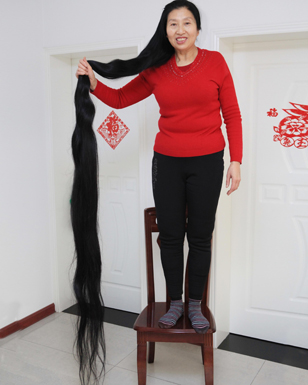 Some people just love to be on the extreme side. Longest nail in the world, longest eyelashes and now longest hair in the world.
I’ve grow my hair down to my waist now sometimes i wonder should I just cut it off because it’s kinda troublesome when you need to tie up you hair in a bun with a hair pin!. If i tie a horse tail its still long.
Hate cutting using the hair dresser’s scissors and definitely not going to use their shampoo because i’m still on no poo method since January this year.

Perhaps the next time you meet me i’ll be the next girl with the longest hair. 😛
A girl in Beijing, Ni Linmei in Taiyuan, Shanxi province in China grew her hair up to 2.53 metre. She’s now 55 years old and kept her hair long since 14 years ago. Her neighbours would help comb her long hair.

Another girl with longest hair
Chenq Shiquin who owns a beauty parlour and never cut her hair for 16 years .
Her hair reached 8 feet long and it takes 2 hours just to wash her hair and another hour to comb it.
That title belongs to another Chinese woman – Xie Qiuping of Guangxi province.
She began growing her long hair in 1973 at the age of 13.

Woman with the Longest Hair – Dai Yueqin
Dai Yueqin, had the longest hair length of 4.2 metre long in Tongxiang east China’s Zhejiang Province. She kept her hair un-cut for 26 years since she was 14 years old.

Watch this girl cut her longest hair. Such a waste! All the years effort