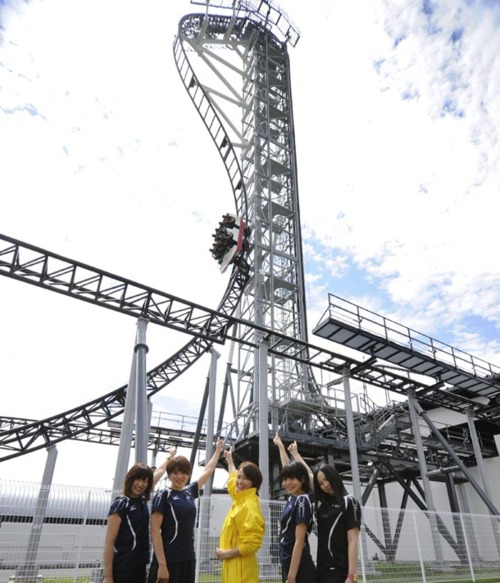 It’s a newly opened roller coaster called The Takabisha ride at Japan’s Fuji-Q Highland Amusement Park. Takabisha is setting its record to be the world steepest roller coaster in the world.
A group of adventure thrill seekers were invited to take part voluntarily for a trial ride on Friday and enjoyed awesome with beautiful scenery view of Mount Fuji on the way up.

The scariest part here is when the ride reached its highest point and began its breathtaking 141ft vertical freefall at 121 degrees.
It’s said that Park owners had spent £23 million on ‘Takabisha’ means ‘Dominate’ in English
If you want to ride on Takabisha, you’ll have to wait until it’s officially opening on 16th July for its 1000 meter track at 112 seconds and accelerates up to 100 kmph of thrill ride.
Watch Takabisha – World’s Steepest Roller Coaster in action