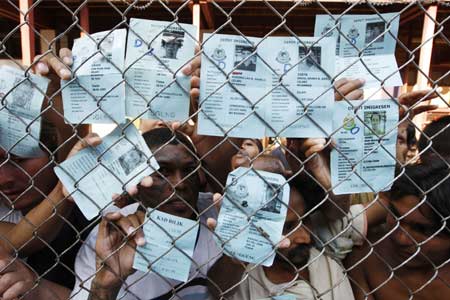 Refugees are person who are forced to leave their country in order to escape times of war, persecution, political oppression, or religious persecution or natural disaster.
The terms asylum-seeker and refugee are often confused:An asylum-seeker is someone who says he or she is a refugee, but whose claim has not yet been definitively evaluated.


The Bar Council slammed the recently announced arrangement between Malaysia and Australia to trade asylum seekers.
“Asylum seekers and refugees are not commodities to be traded.
“The proposed exchange of asylum seekers for refugees between Malaysia and Australia is a misguided approach for dealing with a complex issue with serious ramifications,” Bar Council President Lim Chee Wei said in a statement.
He said it is irresponsible of Australia to abdicate its international obligations under the United Nations Convention relating to the Status of Refugees adopted on July 28, 1951, and its 1967 Protocol.
“Through this deal, Australia is consigning 800 people to a life of uncertainty and probable suffering, given that Malaysia is not a state party to that convention.
“Indeed, it treats all undocumented persons as ‘illegal immigrants’, and subjects them to imprisonment and whipping,” he said.
Under the deal revealed on Saturday, both governments have agreed to deport 800 asylum seekers arriving on Australian shores to Malaysia for processing.
In exchange, Australia will expand its humanitarian intake and resettle 4,000 refugees from Malaysia over four years at a cost of A$292 million (RM940 million).
“It is untenable that Australia proposes to ‘pass the buck’, as it were, for the protection, care and support of these 800 asylum seekers or refugees. Even more astounding is the fact that Australia had reportedly rejected the use of an Australian-built processing facility in Nauru because the nation is not a signatory to the Convention, yet has no qualms about transferring asylum seekers to Malaysia,” he said.
Lim pointed out that Malaysia is already home to almost 100,000 asylum seekers and refugees who have been registered by the Office of the United Nations High Commissioner for Refugees in KL.
He added that none of these asylum seekers and refugees were provided with any material or financial help from the government for housing, jobs, education or health care.
“They exist in a shadow society in which they have no legal rights, and even less protection and security. They live in constant fear of the authorities — the police, immigration personnel and Ikatan Relawan Rakyat Malaysia (Rela) members.
“The Malaysian Bar reiterates its concern that the legal situation and conditions of life of asylum seekers and refugees and their families in Malaysia is degrading, demeaning and dehumanising, and wholly acceptable to any civilised society,” he said.
The Australian government has now been forced to defend its refugee deal with Malaysia to allay concerns over Putrajaya’s record of alleged mistreatment towards asylum seekers.
Since the deal was made known on Saturday, major newspapers in Australia have headlined arguments raised by human rights groups like Amnesty International, the Greens, refugee groups and some Labor Left leaders that the solution was similar to that of the highly-criticised “Pacific Solution” mooted by the previous right-wing administration.
“The Malaysian Bar calls upon the Australian and Malaysian governments not to proceed with this arrangements. Instead, our government must establish a proper and comprehensive framework for dealing with the situation of asylum seekers and refugees who are already in this country, and begin by according such persons due legal recognition. Malaysia must also demonstrate a proven track record of upholding human rights to the highest possible standards,” he said.
Lim added there is an urgent need for Malaysia to become a state party to the United Nations Convention.
Source:themalaysianinsider

Rally organisers say that any assurances the Australian government might give of better treatment in Malaysia for Australian-origin refugees are meaningless.
“Do people really believe that Australian-origin refugees in Malaysia will be able to flash an official card to avoid harsh treatment like arrest and caning?” asked Ian Rintoul, from the WRD organising committee. “Australia and Malaysia can say whatever they like about refugees being properly treated. But Malaysia’s human rights record speaks for itself. There is no guarantee whatsoever that any conditions in the deal will actually be enforced.”
“Australia should not be in the business of preventing refugees from coming here,” Rintoul continued. “We should welcome refugees, not try to repel them. If the government was really serious about preventing people from undertaking dangerous sea-crossings, it would decriminalise people smuggling so that people could come here openly to have their asylum claims assessed.”
Source:themalaysianinsider.com
Read more:
Hard life for refugees in Malaysia
Refugee Deal Ignores Malaysia’s Record