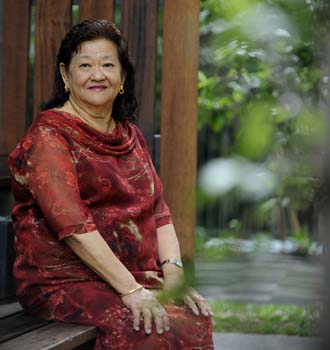 This interesting article appeared in The Straits Times in Mind Your Body Section dated (24-Mar-2011). I’m going to share this informative real life story with my blog readers. It’s about a woman who suffered from liver cancer after years of consuming fatty and oily food. Please read the whole article and start to change our diet, choose health over food.

Madam Ler, whose liver cancer is now in remission, is trying to lose weight so that she can be eligible for a liver transplant. — ST PHOTO: CAROLINE CHIA
After she got married and had kids, Madam Ler Ah Muay was so caught up with work and family life she neglected her diet. For the next 30 years, she ate what she liked and what was conveniently available in hawker centres like Nyonya kueh, goreng pisang (fried bananas) and char kway teow, even though she developed diabetes more than 20 years ago.
The decades of neglect took their toll. The retiree, now 68, can no longer continue her high-calorie diet since being diagnosed with non-alcoholic fatty liver disease last year, a diet-related disease in which fat is deposited in the liver.

Her liver then became inflamed and eventually became scarred – a condition called cirrhosis. She also developed liver cancer, a complication which sometimes afflicts people with a fatty liver, said Madam Ler’s son, Dr Phua Ling Yaw, who is a general practitioner in Shenton Medical Clinic @ Duxton, the Pinnacle.
When a person eats, digestive enzymes in the mouth, stomach and small intestine break down carbohydrates, proteins and fats into smaller molecules such as glucose, amino acids and fatty acids respectively, said Dr Tan Hui Hui, consultant at the Singapore General Hospital’s department of gastroenterology and hepatology.
Bile produced by the liver also helps in dissolving the fats in the small intestine.
These smaller molecules are absorbed through the intestinal walls into the bloodstream, to be used in the rest of the body.
Glucose that has not been used to provide energy to various cells in the body is converted into glycogen, which is stored in the liver as an energy source.
Part of the fatty acids are used to help with brain function, joint mobilisation and absorption of fat-soluble vitamins such as vitamins A and E, while some are stored as adipose tissue under the skin or in the abdomen.
Some fatty acids are stored in the liver as glycogen or converted to hormones or cholesterol. The excess is deposited as fat droplets within the liver.
When too much fatty acid is delivered to the liver for processing or when the liver is unable to break down fat efficiently or a combination of both, the build-up of fat is stored in the liver, resulting in a fatty liver, said Dr Tan.
Fat in the liver may injure the liver cells, which can lead to fibrosis (scarring) and eventually cirrhosis (hardening of scar tissue), Dr Tan said. The consequences of liver cirrhosis include liver failure and an increased liver cancer risk.
Family history, obesity and metabolic syndrome – which includes risk factors such as glucose intolerance, low levels of good cholesterol, high levels of fat in the blood and hypertension – are risk factors for fatty liver disease, said Dr Low How Cheng, consultant at National University Hospital’s department of gastroenterology and hepatology.
People who want to take care of their livers should choose low-fat dairy products and substitute simple carbohydrates, such as white rice and bread, with complex carbohydrates, such as whole grains, said Dr Tan.
They should also avoid self-medicating unnecessarily, consuming herbs from unreliable sources, crash diets and rapid weight-loss programmes, she said.
The condition of a fatty liver can be reversed if a person exercises and keeps to a low-fat diet.
However, it is too late for Madam Ler’s condition to be reversed. She found out about the cirrhosis and cancer in February last year, when she suffered a hip fracture and had her blood tested. ‘Before that, I was tired easily, had gastric pains and had no appetite but I did not see a doctor,” she said.
She underwent radiotherapy and chemotherapy last year and the cancer is now in remission. But the liver cirrhosis has robbed her liver of 80 per cent of its function and she needs a liver transplant.
Now, Madam Ler watches her diet and exercises regularly to lose weight so that she can be eligible for a transplant. This is because being overweight means the body is more likely to reject a transplanted liver. ‘I was lucky it was discovered early. My brother died of liver cancer,” she said.