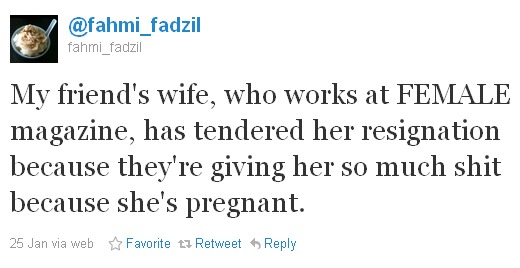 Social activist, Fahmi Fadzil was ordered by Malaysia court to tweet 100 times over 3 days in his twitter account after he tweeted a defamations statement about one of his friends, who was pregnant and had been poorly treated by her employers at a magazine run by Blu Inc Media in January.
This is what Fahmi Fadzil tweeted in Jan : “My friend’s wife, who works at FEMALE magazine, has tendered her resignation because they’re giving her so much shit because she’s pregnant.”

At this time, he had completed 25/100 of tweets:
25/100 I’ve DEFAMED Blu Inc Media & Female Magazine. My tweets on their HR Policies are untrue. I retract those words & hereby apologize

Link
According to source, it’s said although he tweeted an apology to Blu Inc a few hours later, the company’s lawyers sent him a letter demanding unspecified financial damages for defamation later.
They also asked for an apology in major newspapers, Fahmi’s lawyer, Syahredzan Johan, told AP.
Syahredzan said Fahmi settled the case by agreeing to apologise on Twitter, where he has more than 4,200 followers.
Blu Inc officials familiar with the matter could not be reached for comment.
Fahmi Fadzil is so famous now, he appears on national TV and global news

What’s BlueInc trying to do here? More attention from online netizen? Trying to boost up their magazine’s sales?
From my point of view, it will surely reflect negative impact on their magazine sales and image. As a consumer, and also younger generation i believe online media is a place where we can voice out our likes and dislikes our opinions on how things should be done or in a way we believe it should be done. Why can’t there be any freedom of speech in our country where we speak our mind and do no harm to others.
If someone ask me whether i’ll buy BlueInc magazine from now on. I don’t think so.
See what others tweets on