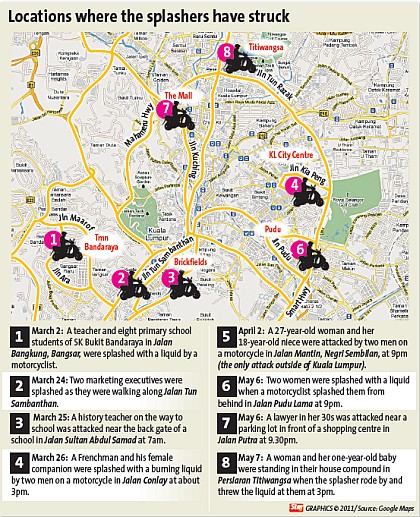 Photo source: TheStar
There have been more than 22 attacks involving more than 30 victims splashed with acid in Malaysia.
May 13 – A woman was splashed with acid liquid while she was driving with her driver’s side window down when the splasher came up to her side near Section 10 in Wangsa Maju at 8.45am.

May 7 – A woman and her one-year-old baby were standing in her house compound in Persiaran Titiwangsa when the splasher rode by and threw the liquid at them at 3pm. Both mother and child were rushed to KL Hospital for treatment as the liquid had entered their eyes.
May 6 – Thirty minutes later, a lawyer in her 30s, was attacked near a parking lot in front of The Mall shopping centre in Jalan Putra.
May 6 – Two women were splashed with acid when a motorcyclist attacked them from behind in Jalan Pudu Lama at 9pm.  – Nor Azia’s left eye region was damaged in the attack. Nor Azia suffered five per cent burns to the face, neck and hands. The two were walking towards a bank to use the ATM when the motorcyclist attacked them from behind.
April 2 – In Jalan Mantin, Negri Sembilan, a 27-year-old woman and her 18-year-old niece were attacked by two men on a motorcycle 9pm. 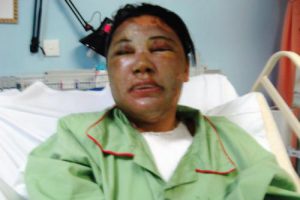 VICTIM: Zuhainah Tengkis, who was attacked in Jalan Mantin, Negri Sembilan, on April 2
March 26 – A Frenchman and his female companion became the 13th and 14th victims of a corrosive liquid-splashing attack by a motorcycle duo in Jalan Conlay about 3pm.
March 25 – A 25-year-old history teacher, on the way to school, was attacked near the back gate of a school in Jalan Sultan Abdul Samad at 7am. According to her, “My wounds have healed but there are scars and I need to use eye drops every two hours because my eyes hurt”. She suffered discomfort in her eyes and burns on the chest.

TRAUMATISED: Ng, wearing only a towel as normal fabric irritates her wounds, with her father — Pic: Oriental Daily
Due to the burns, Ng cannot wear normal clothes yet as it hurts whenever the fabric touches the wounds.
She also needs to clean the wounds at least five times a day to avoid infection.
“I only use a towel to cover the upper part of my body as I am unable to wear any clothes, let alone a bra. It’s so painful. My wounds still bleed and has puss.”
March 24 – Two marketing executives were splashed with acid as they were walking along Jalan Scott, off Jalan Tun Sambanthan at 5.30pm.  Rohainah and a fellow marketing executive became the 10th and 11th victims while walking to their car  after work near Jalan Tun Sambanthan in Brickfields. “We had just left the office and were walking to my car, which was parked down the road, when my colleague saw a motorcyclist stop behind me.”  Rohainah’s colleague suffered less severe injuries. Rohainah Husin said she had to undergo follow-up medical treatment every two days for her injured ear.

March 2 – Eight Year 4 and Year 6 pupils and a teacher of SK Bukit Bandaraya in Jalan Bangkung, Bangsar were splashed with a liquid by a motorcyclist clad in black
February – In mid February, two men splashed acid at a secondary school in Lorong Maarof in Bangsar. No one was hurt in the incident. No police report was lodged

Police have released a photofit (pic) of the corrosive liquid splasher.
The photofit was produced primarily based on a witness account of a possible attempt by the splasher in Jalan Desa Pandan yesterday and victims of earlier attacks.
The witness told police of seeing a man on a black Honda EX5 motorcycle about to uncap a plastic bottle. 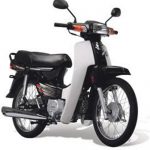 The witness said the motorist fled after realising that he had been spotted.
The suspect wore a full-faced black helmet.
City CID chief Senior Asst Comm Datuk Ku Chin Wah urged the public to help police catch the criminal.
“He is believed to be in his 30s and was on the motorcycle that had a false registration number,” said SAC Ku.
The false registration number was noted as WPV 4963.
Those with information on the splasher can call the police at their Rakan Cop hotline (03-2115 9999) or SMS POLISKL at 32728.
Call police if you have information on the acid attacks: RAKAN COP HOTLINE: Kuala Lumpur 03-21460585/ Selangor 03-20529999/Bukit Aman 03-22663333 or SMS: POLISKL and send it to 32728.