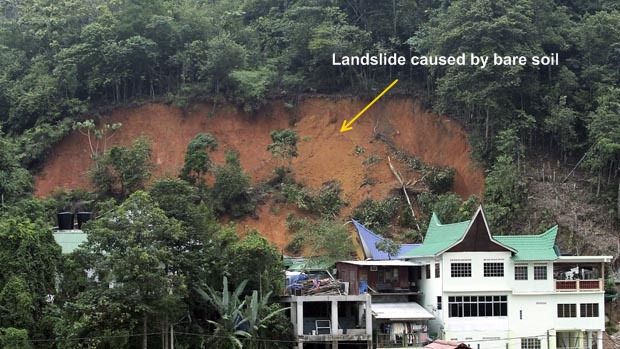 Judgement Day was predicted on 21st May, 2011 yesterday at 6 pm New Zealand time (2pm Malaysian time). Harold Camping calculated and according to his reading of the Book of Ezekiel said a major catastrophe will wipe out the whole planet earth. But, nothing seems to happen to most of the countries. However, Malaysia’s judgement day came true on 21st May 2011 where a landslide caused by heavy rains hit Malaysian orphanage and killed 16 people mostly orphans.


Bodies of 15 boys, age 8 to 18 and a 34 year old caretaker was recovered so far. Only nine (6 boys and 3 wardens) survived the landslide tragedy and was in critical conditions were rushed to Ampang Hospital for treatment. One of the boys had to amputate his leg due to severe injury after he was pulled out.

Landslide often caused by soil erosion resulted from property development contructions. As we all know, Malaysia climate is hot and humid and we experienced year-round with the rainy season. We should plant more trees to avoid the repeating incidents on landslide tragedy instead of logging trees to build more buildings.
The incident took place at around 2.30pm local time at the Children’s Hidayah Madrasah al Taqwa orphanage in Hulu Langat, just south of the capital Kuala Lumpur. Twenty-five people, who were attending a motivational camp at the orphanage, including 20 children and five adults, were trapped in the mud and rubble after the two landslides.
Rescuers have to dig using their hands and other equipment because the soil surrounding is very soft due to the rain
Mohammed Iman Abdullah, a 14-year-old who escaped the landslide, was quoted as saying: “I shouted to others to run and in a split second the earth came tumbling down, burying many of my friends.” Meanwhile Hambali, 34, told the Malay-language Berita Harian newspaper,”I heard a loud noise. Suddenly the earth was chasing me. I had to run to save myself,”.
The Selangor state government has ordered an investigation into the safety of hillsides in the area.