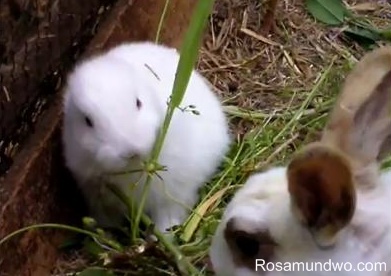 An earless bunny was born near Japan’s Fukushima nuclear power plant. Japan citizen fears this deformed bunny was the aftermath from leaked nuclear plant after Japan’s earthquake on March this year. They feared apart from animals, human beings could be affected too.
“Yuuosato” had posted a youtube video entitled “Earless Bunny Born After Tokyo Electric Power Company Fukushima Nuclear Power Plant Accident.”
Translation of the video description below:

“After the nuclear accident, government and the media said there was no immediate effect on the health. But in the town of Namie Tsushima, which is outside the 30 kilometer area or outside the mandatory evacuation zone, it happened. So far as there has been no news about this kind, it certainly makes one suspect that the government is deliberately making an effort to keep news of the radiation leak a secret. The rabbits, which are housed in an outdoor bunny pen, are eating wild grass, which resulted in earless bunny’s birth. This is the first anomaly/deformation ever born. Life cycle of a bunny is quicker than humans. As I am wondering if humans will be the next victim, I imagine the future picture of human babies.”
Majority of viewer raised question about the credibility of this video. However, many are concern over the nuclear radiation leaked instead.
Read their comments
“There will be more of these kinds found later.” – sunflo127
“I want to feel easy but everyday the situation becomes worse and there is no sign of improvement. There is nothing to feel easy about.” – mikinish88
“I heard that the possibility of leukemia and cancer may increase after the radiation leak. Is it true?” – gaongeohnj
“Thank you for the precious movie. We don’t know if it is a coincidence or a human error. There is no sin in rabbit. We don’t want to give up and prevent as much as possible. It’s good if we keep our health as a result of it. If a baby without ears is born to you and someone you love, you can never get away with it. We can’t say it’s cute. – G0ingMerry
“In the recent future, I guess Japanese children will become more like this. I am wondering how Tokyo Electric Power Company will react to this.” – neoeliminator
What do you think? Will this affect human beings as well. Will Japan repeat the same problem after World War II. Will human mankind be able to preserve their good cells or generate more mutant babies in the future?
Watch the video clip to see the earless bunny: