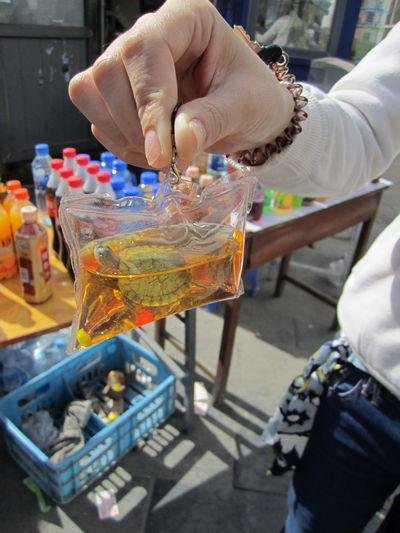 When is the last time you took a long look at your keychain?
This is probably one of the cruelest act you will see when you’re carrying a live animal in your pocket. Believe it or not, it’s a craze in China now.They are sold at subway entrances and train stations. These keychains comes in live fish and turtles and they are sealed in a airtight plastic container, which is filled with colored water with “nutrients” water, each 7 cm long key chain and encapsulate either one Brazil turtle or 2 small kingfish.
According to vendors who sold these live animals inside the keychains, buyers are reassure that nutrients water is enough to sustain the animals for more than a month or two. Sources said sales of these items are good as one fish and 9 turtle rings are sold within 5 minutes.
A man in his 30s said after buying a turtle key chain “I’ll hang it in my office, it looks nice and brings good luck”
Another woman told Global Times, “I bought one to free it. It looks so miserable”
And how possible it is for these animals to live with no oxygen and food to survive in a month? They would probably died by day two or perhaps likely to die in a few hours.
These act of cruelty is by and law legal in China. Some people think is a horrible way to treat such animals and some even buy these keychain in order to set them free.
Animal protection groups are voicing their opposition to the sales of keyrings.
“To put a living thing inside a sealed and confined space for profit is immoral and pure animal abuse,” said Qin Xiaona, director of the NGO Capital Animal Welfare Association.
However, “China only has a Wild Animal Protection Law,” Qin explained. “If the animals are not wild animals they fall outside the law’s scope.”
“If an animal protection law is too much to hope for, we urgently need an antianimal abuse law,” Qin said, appealing to citizens not to buy such key rings. “If nobody buys it, the market will die,” she added.
Stop buying and stop cruelty to animals.