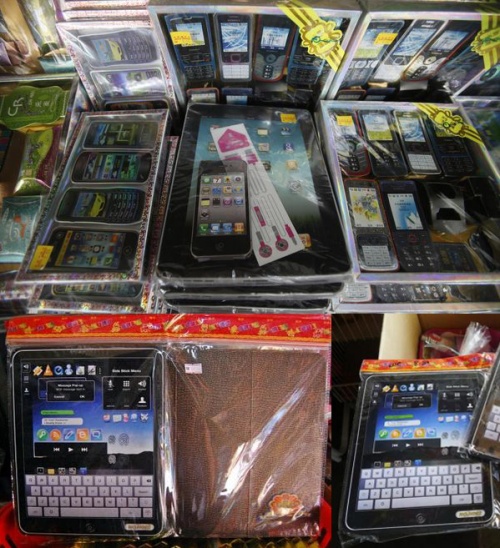 Younger chinese generations are crazy over Apple’s iPad and now they are trying to introduce the latest gadget for their dead family members and relatives during Qingming festival also known as the tomb sweeping festival which happens to be today on 05th April, 2011.
The chinese believe in burning paper replicas items such as LCD TVs, house, maid, fake money, dvd player, mobile phone, clothes, cars and many more for their dead relatives to enjoy in their underworld or in their afterlife.
However, do our grandparents really know how to handle this latest gadgets; ipad?

KUALA LUMPUR (Reuters) – Apple’s iPad 2 shortage has spread to the afterlife as Chinese families in Malaysia rush to buy paper replicas of the popular new gadget to burn for their dead as part of a centuries-old rite. 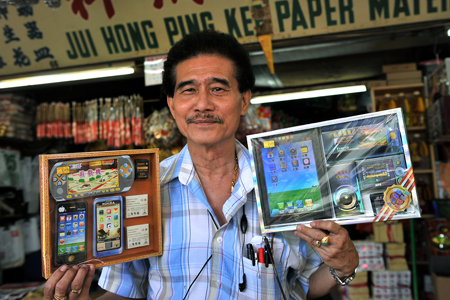 During the Qingming festival, also known as the tomb sweeping festival, Chinese communities in Asia honor their ancestors by burning fake money or replicas of luxury items such as flashy cars and designer bags.
The festival, which stems from Confucian teachings of loyalty to family and tradition, is also celebrated widely among the Chinese in Malaysia, who make up a quarter of the 28 million people in the mostly Muslim but multicultural country.
“Some of my customers have dreams where their departed relatives will ask for luxury items including the iPad 2,” said prayer item shopkeeper Jeffrey Te as he filled cardboard chests with fake money at his shop on the outskirts of the capital.
“I can only offer them the first iPad model,” he added, pointing to shelves stocked with the gadget along with paper iPhones and Samsung Galaxy Tabs.
Te shipped in 300 iPad 2 replica sets from China for the Qingming festival, which has just flown off the shelves and left him struggling to meet demand — a scenario Apple Inc also faces.
In Te’s shop, the first and second generation paper iPads sell at a dollar for 888 gigabyte capacity, an auspicious number in Chinese culture. A basic 16 gigabyte iPad for the living costs $499.
Read more..