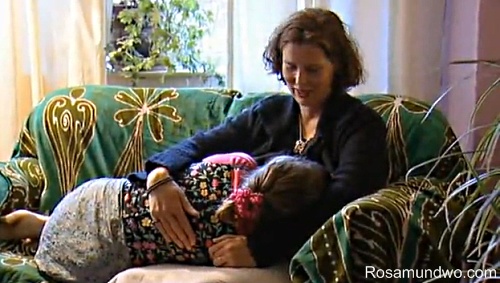 Breastfeeding nine year old kid
Veronika Robinson of Penrith in the UK choose to breastfeed her kid as her 9th birthday present.
Robinson stop or weaned her oldest daughter from her breastfeeding when she turn five years old, but when she turned nine, she asked for breastmilk again. Robinson still breastfeeding her other daughter. The younger daughter Elizah is almost eight and does not want to stop drinking milk from her mother’s breast. “I don’t want to be weaned. I want to breastfeed for ever,” Elizah says.
Robinson recently went on the Britain’s Channel 4 to speak about her decision to defy convention and extend breastfeeding with her daughters to such an advanced age. Not surprisingly, Robinson is an extreme lactivist who edits an alternative-parenting magazine called The Mother. “My girls were brought up to think it was completely normal to ask for a breast in a shop,” she said on the program. “That’s bad enough when they are toddlers, but when they are big girls, people get freaked out by it. I try to be discreet, but we have had some odd looks. People tend to be disgusted and disbelieving.”

Another video of extended breastfeeding
(ABC News) – Robyn Paul, her husband and their three children look like the classic American family — until you find out that Tiernan, their kindergartner, is still breast-feeding. Many people are shocked by the idea of nursing a child who is nearly 6 years old, but Robyn remains determined to do what she says is best for her child. No one is sure how many women in the United States are breast-feeding older children… How old is too old?