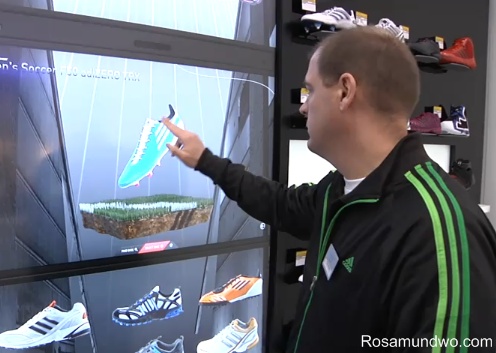 Adidas virtual shoe wall
Virtual shopping with an added feature of touch screen monitor technology is the latest trend now. Tech company, Intel teamed with Adidas and Start Creative on a virtual shoe shopping, AdiVERSE touch screen monitor, which enable shoppers to experience virtual shopping from spinning, twisting to turning the 3D rendered footwear picture and enlarging it from their original size. There are around 110 shoes available in the system now, and Adidas company plans to scanned all 4,000 types of their footwear by the time this wall appears in store.
Prior to that, short description for each footwear will be provided for easier selection. In addition, the availability of each sizes in store and those available for delivery are shown.
For selected shoes such as Adidas’ F50 soccer shoe, there will be a further elaboration on marketing information for example how well it scored during the last World Cup or whether it was the top scoring shoes. Video showing famous soccer players who wore this shoes are also displayed.
Social media websites Twitter and Facebook had joined Adidas in sharing comments about the shoes, user can see what people are saying about this shoes.
A virtual shoe wall shopper can then buy their chosen shoes via a tablet based checkout as well as from the cash desk and have them delivered to their home if stocks are not available.
According to Chris O’Malley, director of retail marketing at Intel, when a customer step up to the screen of Adidas footwear wall, 2 small cameras mounted above the screen served as a tracking device where it will record the gender on whether a potential shopper is a male or a female. Other than that, it could also provide demographic age data and will also tell you how many people stood in front of the wall and how long they looked at the wall.
In the near future, Kinect-like motion sensor will be added to enhance this system where shoppers won’t have to be physically touching the monitor displays. This means manipulations are possible even by people passing by behind a glass store window.
The system are an inspired of an online shopping concept and blending them to a brick-and-mortar shopping experience, said O’Malley.
“There’s still a lot of appeal to brick-and-mortar shopping,” he said. “It actually gives you a reason to go into a store and shop at Adidas.