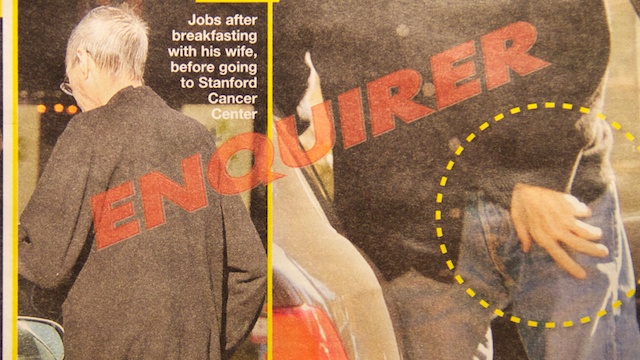 Photographs of Steve Jobs was published by The National Enquirer showing Jobs, aged 55  in a thin looking skeletal form. It was reported he is undergoing cancer treatment at the Stanford Cancer Centre in Palo Alto, California last week. Patrick Swayze was a patient at that particular clinic right before he died.
Several doctors predicted by looking at these photos, he’ll have at least 6 weeks to live. Dr Gave Mirkin, a practising physician and radio talk show host, and Dr Samuel Jacobsen, a critical care doctor in Florida, analysed the photos and predicted Jobs has weeks to live. Neither of the doctors are oncologists and neither of them have seen Jobs in person.
“Judging from the photos, he is close to terminal,” Dr Jacobson said.
“I would say he has six weeks.”
Jobs took a medical leave of absence from the computer company in January and set no date for his return.
It is the third time Jobs has taken medical leave — the first was in 2004 to treat a rare form of pancreatic cancer and the second was in 2009 to undergo a liver transplant.
Entertainment news website Radar Online confirmed Jobs had been attending the cancer centre.
Jobs co-founded Apple in 1976 and helped revive it in the 1990s.

What will happen to Apple if Steve Jobs die? Will Apple die without Steve Jobs?