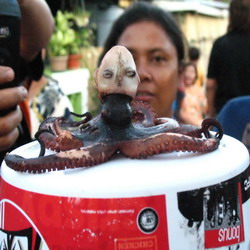 PADANG – it turns out was a strange event occurred when Ita (42) the resident Street Berok I No. 48, Kelurahan Berok Nipah, West Padang Subdistrict, Kota Padang, West Sumatra. cooking octopus which is then known to have a head like a human.

To the Legal Ita said, the strange events began when she was cooking octopus casserole week in January 4, 2008 yesterday afternoon. At that time, arrived he heard a sound like a crying baby.
“I heard a voice like the sound mengeak-ngeak baby, I think it’s neighbor’s child but it was not possible because there are no neighbors with babies,” he told the Legal, Monday (5/1/2009).
At first Ita ignore the voice, but the longer the voice was getting louder. Ita looking for where the voice, and turns himself into the kitchen when it got louder voice heard. He gasped when I discovered the sound came from the cauldron where he was cooking octopus.
“I’m more surprised the head of the octopus that came amid similar cauldron of people for help and stir-motion, even I noticed again turned his head like a human,” he said.
Strange octopus was given the name Siti Nurbaya by the owner. Unfortunately, animals that had horrendous residents around it finally died after boiling.