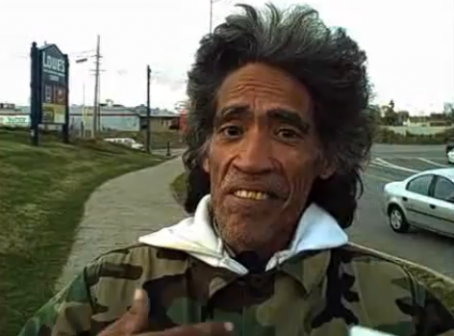 The Columbus Dispatch discovered a homeless man along Ohio’s I-71 who claimed to have god gifted voice. This video went viral and it had changed his life ever since. Today he’s in high demand for jobs offered by radio stations, voice over gigs, and even the Cleveland Cavaliers.
According to the note he wrote on a piece of cardboard to solicit change from drivers, the homeless guy whose name is Ted Williams was an ex-radio announcer. Williams tells the Dispatch about his struggles, but thankfully “alcohol and drugs and a few other things” haven’t diminished Williams’ velvety vocal cords, and he says he’s two years clean now.


“I have a god given gift of voice. I’m an ex-radio announcer who has fallen on hard times. Please! Any help will be greatfully appreciated. Thank you and God bless. Happy holidays,” reads Williams’ roadside sign for help.
The power of video viral had brought Williams back to broadcasting industries after he was approached by more than a few morning show appearances. Reddit reported that Ted was also approached by Columbus area radio show the Morning Zoo and appeared on this morning’s program, and even found time for an interview with CBS’ “The Early Show”:
In just 24 hours after the video went viral, Williams says he’s already been offered a bunch of employment opportunities, including one that’s a Ohio citizen’s dream job. “The Cleveland Cavaliers just offered me a full-time job and a house,” Williams revealed. The Cavs will reportedly have to compete against MTV, the NFL and likely countless more suitors for Williams’ services.
While Williams’ sudden and lucky twist of fate could bring any man to tears, he gets most choked up when discussing how an invitation to do the gamut of TV shows in New York has opened the door for him to visit his 92-year-old mother in Brooklyn for the first time in years. “One of my biggest prayers that I sent out was that she would live long enough to see me rebound,” Williams said. “There’s so many words. I’ve already been compared to Susan Boyle… I’m just so happy.”
[adsense3]