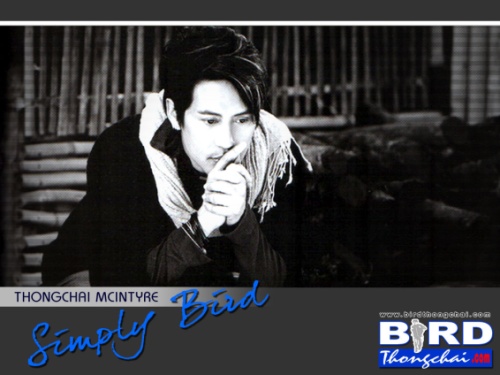 Bird Thongchai Official Youtube Channel
Bird McIntyre (born Albert Thongchai McIntyre, December 8, 1958) is a Thai pop singer who released his debut album in 1986. He is also sometimes known as Bird Thongchai, Thongchai McIntyre (Thai ธงไชย แมคอินไตย์) or Pi Bird.
Biography
Thongchai McIntyre or “Bird Thongchai” is best known for his string (Thai pop) and luk thung music. He has also acted in films, on television, musicals, and in commercials.
Thongchai McIntyre was born in Bangkok in 1958 to parents James and Udom McIntyre. His family were musicians, hence he enjoyed an upbringing in a musical environment. His father, who was a half-Scottish luk kreung, died when Bird was still a child. He started working in a bank as an officer. While working in a bank, he had a chance to meet the famous Thai TV producer “Kai Varayuth” who saw entertainment talent in Bird. Bird played his first TV series with Kai while still working in a bank. This role revealed his talent. Soon he had several works, including a movie role, and radio exposure. In 1983 he attended a famous singing contest “Siam Kolkarn Music Foundation” and won a prize. He got another great chance to meet a famous singer “Ter Rewat” who was a star in this contest. Ter saw his singing talent and invited him to produce his first album. His debut album “Hadsai Sailom Songrao” was released in 1985 and since then, Bird has been a leading fixture in the Thai Pop music industry. Bird is considered one of the most famous entertainers and singersin Thailand. He holds a substantial amount of shares in the Thai music giant Grammy Entertainment, which is Thailand’s number one music company. Bird is good friends with Mr. Paiboon Damrongchaitham, Grammy’s Chairman.
His most memorable roles in Thai television drama series include Captain Kobori from Koo Kam, a tragic love story between a Japanese soldier (played by Bird) and a local Thai girl during the World War II. He reprised his role in the 1996 film adaptation, Sunset at Chaophraya.
Among his best-known songs are Prik Kee Noo (mouse shit chilli), Boomerang, Sabai Sabai (relax relax) and Kob Jai Jing Jing (Thank you truly). His popular singles released recently include luk thung singles Mah Tummai (with Jintara Poonlarp), Fan Ja (with Jintara, Nat Myria Bennedetti and Katreeya English), Lao Su Kan Fang, and Yak Tham Kor Tob and Mai Kang Ying Pae from his album “Volume One”.