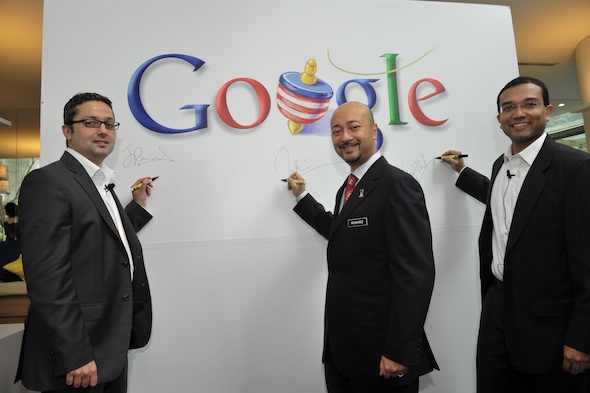 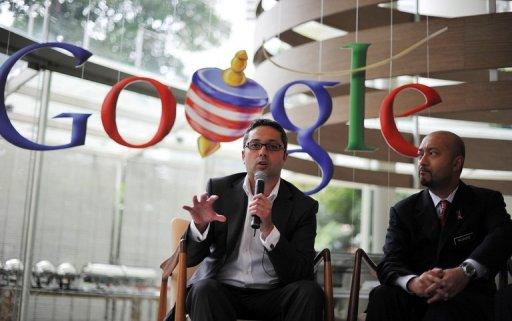 Photo credit: lowyat.net
Google SEA managing director Julian Persaud, Dato Mukhriz and Sajith (from left-right) at the opening of the new Google Malaysia office.
Persaud said Google was targeting small and medium enterprises in Malaysia with its “search and display” services, aimed at helping them reach new markets.
He said the Malaysian operations, set up four years after the creation of Google’s first Southeast Asian office in Singapore, would customise products such as Google Maps, Google News and Google Translate for the local market.
Google said it will hire a record number of people this year, taking on more than 6,000 workers worldwide.
Persaud also said the return of co-founder Larry Page to the company’s helm in April would not affect operations in the region.
“I don’t see it as much of a change as the current CEO will still be in the company… It’s business as usual,” he said.
Last week, in a surprise shakeup of its top management, the California-based company announced that Eric Schmidt, its chief executive over the past decade, would step aside in April and be replaced by Page.
Despite revenues of nearly $30 billion last year, Google is under pressure from new rivals such as Facebook and Twitter for the attention of Web surfers, advertising dollars and engineering talent.
Google Malaysia is also currently hiring for its KL office and job openings can be viewed on their website, www.google.com.my/jobs in the near future. Welcome To Malaysia Google!
Source:352 websites

One thought on “Google open office in Kuala Lumpur”