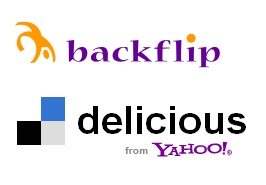 Social bookmarking has been a trend ever since 1996 with the launch of
itList, Backflip, Blink, Clip2, ClickMarks, HotLinks and others.
Blink included browser buttons for saving bookmarks;
Backflip
Backflip enabled users to email their bookmarks to others and displayed “Backflip this page” buttons on partner websites. Lacking viable revenue models, this early generation of social bookmarking companies failed as the dot-com bubble burst — Backflip closed citing “economic woes at the start of the 21st century. In 2005, the founder of Blink said, “I don’t think it was that we were ‘too early’ or that we got killed when the bubble burst. I believe it all came down to product design, and to some very slight differences in approach.”
By 2003, Delicious (then called del.icio.us) pioneered tagging and coined the term social bookmarking.
In 2004, as Delicious began to take off, Furl and Simpy were released, along with Citeulike and Connotea (sometimes called social citation services) and the related recommendation system Stumbleupon.
In 2006, Ma.gnolia, Blue Dot (later renamed to Faves), and Diigo entered the bookmarking field, and Connectbeam included a social bookmarking and tagging service aimed at businesses and enterprises.
In 2007, IBM released its Lotus Connections product.
Sites such as Digg, reddit, and Newsvine offer a similar system for organization of social news.
Out of the rest of these social bookmarking sites, as far as i know Backflip is quite popular back then just like the current Delicious.com. People always said “history repeat itself”. Will Delicious suffer the same just like Backflip…

Will the history repeat itself??

In September of 2001, when Backflip’s parent company realigned their business objectives they decided to close down this website. Just like Yahoo decided to close down Delicious. In this case, Backflip didn’t sell its business to competitor nor close it down, instead they hand over to a small team of ex-Backflip employees who then took over the whole operation even though they are no longer working there.
Will Yahoo willing to do the same thing? Maybe or maybe not.
After years of struggling to maintain and revive Backflip.com, in Nov 01, 2010, they had to cease the whole operations. 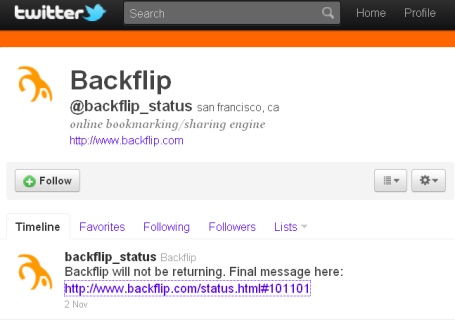 [ November 1, 2010 – 1:13pm PDT ]
As everyone has figured out by now (it would take an unbelievable optimist at this point), Backflip will not be returning in its previous form. The data was irrevocably lost. It’s truly painful to admit defeat but it’s been over a year and the motivation just isn’t there to continue further. We have exhausted almost every attempt at recovery but have succummed to a most unfortunate series of events governed by Murphy’s Law. Massive power spikes wiped out our database servers over a year ago. Our backups were missing a critical file due to human error. Children have been born and priorities changed. And so, after almost exactly a decade online, the current incarnation of Backflip is no more. Thank you to everyone who supported us through the many years. Thank you to all the wonderful donations (donations made after October 13th, 2009 have been refunded) and words of encouragement. Signing off officially now: The humans…
[ October 13, 2009 – 7:00pm PDT ]

A power outage at our hosting facility took out all of our servers for several hours starting around 7:00am PDT. Once the power came back on we began to bring the servers up remotely. Unfortunately, the database server is refusing to start up. Surely it’s nothing terminal but will require human intervention and there is no one available to head over to the colo facility at the moment. Please check our twitter microblog on the left for the latest updates.
[ January 5, 2009 – 11:08pm PST ]
We’re up and running now however we’re not completely done with the recovery and there are parts of the site that will not work. We appreciate your patience while certain parts of the site come back over the next week. You do not need to be worried about making changes to your account while recovery continues. Our processes account for new changes.
Backflip status