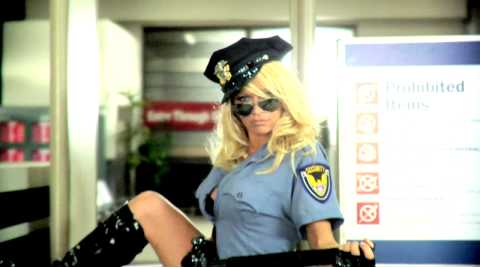 Pamela Anderson advertisement in Hong Kong airport with the title “Cruelty Doesn’t Fly” is banned because its deem too racy for Asian culture.
This sexy video stars Pamela Anderson as an airport security who then stripped off passenger’s leather furs and other animal skins. Also seen as inappropriate where a nude couple appearing on this video walking through checkpoint created by People for the Ethical Treatment of Animals (PETA).
According to Jason Baker, PETA Asia’s Vice President, “Given the groping that you see at security checkpoints and the nudity that you see in body scans we’re surprised that our lighthearted ad was deemed too risqué”.
This ad was evaluated by JCDecaux, the advertising agency who is responsible for airing videos at Hong Kong’s airport and in their opinion, the city’s airport authority said the commercial was “considered inappropriate” because it might offend some visitors.

The ad also features comedian Steve-O, a star of the ‘Jackass’ movie series, and German punk icon Nina Hagen — is already banned at airports in New York City and Boston, PETA said.
The animal rights group is not going to give up and added they still hope to run the advertisement in other Asia-Pacific airports, including Tokyo, Seoul and Sydney.