Having a slim figure looking like a model is every girls dream of achieving.
And some choose the wrong way of doing it eg. starving yourself just to shed that pounds off. 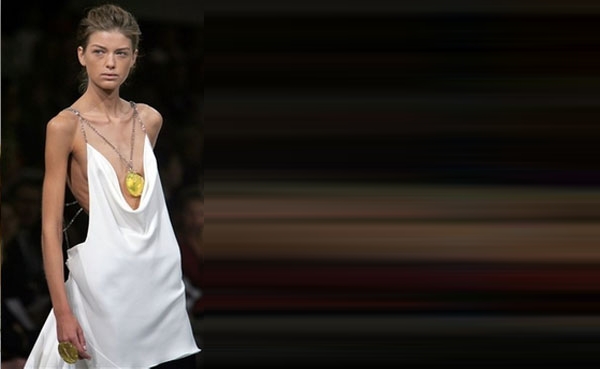 The end result could be detrimental to your health just like Isabelle Caro, a French anorexia model who died on 17 November 2010 at the age of 28 in Tokyo, Japan after spending about two weeks in hospital with acute respiratory disease although the cause of her death remains unknown. Her family only reported Caro’s death to the media on December 29, 2010.
Isabelle Caro has become a symbol of fashion’s zero size model because of her weight from eating disorder.
She had been having eating disorder since she was 13 and her anorexia was caused by what she called a “troubled childhood”
When she appeared on CBS’s The Insider, it was revealed that at the worst of her eating disorder, her weight had gone as low as 25 kilograms (55 lb; 3 st 13 lb) at a height of 1.65 metres (5 ft 5 in); her most recent weight was 33 kilograms (73 lb; 5 st 3 lb).
She appeared on Channel 4’s Supersize vs Superskinny which aired on 11 March 2008, in which she spoke to journalist Anna Richardson about her anorexia.
Caro was hospitalized for the first time when she was 20. At her worst, in 2006, she slipped into a coma, weighing just 55 pounds (25 kg; 3 st 13 lb). The doctor said she would not survive the coma but she did.
Caro was also interviewed in the second episode of the TV documentary series, The Price of Beauty, in which Jessica Simpson and her two best friends, Ken Pavés and CaCee Cobb, traveled the world to explore the meaning of true beauty. Jessica investigated the problem of how some female fashion models have become obsessed with being skinny. Caro talked about how she became anorexic and warned other girls about the affliction. Simpson was moved to say “What you are doing right now makes you more beautiful and I hope women all over the world hear about the story and it is important to know that how skinny you are does not make you beautiful.” It aired on March 22, 2010 in the USA and on August 21 in Japan.

In 2007 Caro agreed to take part in a controversial Italian ad campaign. Under the headline “No Anorexia”, the shocking image of Caro’s skeletal frame appeared on billboards and in magazines around the world. Her billboard campaign, which was shot by photographer Oliviero Toscani and endorsed by the Italian Ministry of Health, ran in Milan to coincide with that city’s Fashion Week. According to the Daily Mail, at that time Caro was reported to have weighed just 68lbs even though she was 5ft 4in in height. The controversial billboard was meant to raise awareness within the fashion industry about the eating disorder, but proved controversial with designers.

Isabelle Caro (1982- 2010)  – Weighing 70 pounds and standing 5’4, Isabelle Caro became the face of Toscani’s “No To Anorexia” campaign during Milan’s Fashion Week.
Her long-time acting instructor, Daniele Dubreuil-Prevot, said she did not know the cause of Caro’s death but added that the model “had been sick for a long time”.