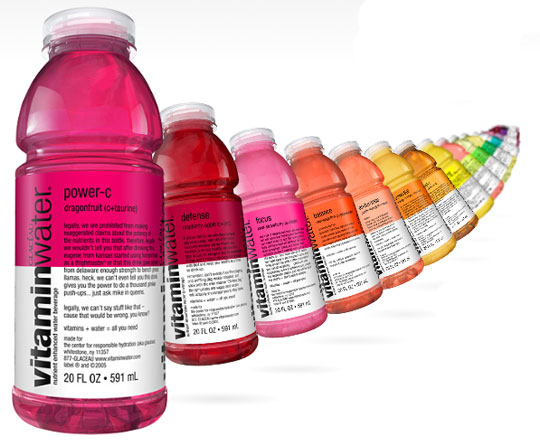 Most of the Singaporean now have tried this Vitamin Water by glacéau vitaminwater.
These so called “Glaceau Vitamin Water” is a privately owned subsidiary of Coca-Cola Company based in Whitestone, New York City that manufactures and distributes various lines of enhanced water and was developed by J. Darius Bikoff, who wanted to create a vitamin drink that had a pleasant tasting flavor.
They claimed the taste of Vitamin Water is subtle, and not overpowering like many other vitamin waters, and has a much higher vitamin content than most traditional drinks.

This brand (Coca-Cola brand) is adding calorie-free versions to the line of its Vitaminwater drinks.The new beverages will be available to purchase across the USA. The new drink is a great solution for those who want to stay healthy and consume high-quality sugar-free products with vitamins and electrolytes.
The company is going to present 7 flavors of Vitaminwater zero in 20oz bottles: xxx (acai-blueberry-pomegranate), multi-v (lemonade), essential (orange-orange), mega-c (grape-raspberry), go-go (mixed berry), recoup (peach-mandarin) and revitalize (green tea). The Vitaminwater line markets itself to health-conscious consumers, with its emphasis on vitamin and mineral combinations for specific benefits like “focus” and “endurance.” Now they will be able to enjoy their drinks without being worried about the body-shape. No sugar — only sweetness.
But according to reuters, Earlier this year, the Center for Science in the Public Interest filed a class-action lawsuit against Coca-Cola on the grounds that Vitaminwater made deceptive claims about the drink’s health benefits.
Sugar in Vitaminwater zero drinks will be replaced with Truvia, a natural sweetener, which is made from the Stevia plant. Developing an absolutely calorie-free drink is the next step after launching Vitaminwater10, a 10-calorie variety of the brand.
For more information you can visit their website at
[adsense1]
http://www.vitaminwater.com
http://twitter.com/vitaminwater
http://myspace.com/vitaminwater
http://www.glaceauglobal.com
Vitaminwater Crowdsourcing in Facebook 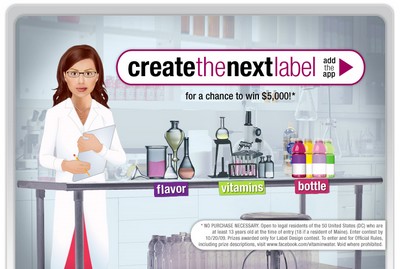 Vitaminwater is giving its fans a chance to create their own variety of the specialty beverage via the “Flavor Creator Lab” application on Facebook.
Contestants will design all aspects of their creation — from the flavor and nutritional function to the actual design of the bottle.
The winning flavor will be selected by country singer Carrie Underwood and rapper 50 Cent, and will hit store shelves in March of 2010. The rapper, also an investor in Vitaminwater, has already co-created his own grape flavor, “Formula 50,” and allegedly raked in some $400 million when Coca-Cola acquired Vitaminwater’s parent company, Glaceau, for $4.1 billion in 2007. The two have been fans of Vitaminwater for a long time, says Eric Berniker, senior VP of brand marketing, Coca-Cola Co.’s Glacéau, which makes Vitaminwater.
“Carrie Underwood is going to help judge because she is well aware of America’s fascination with voting for their favorites,” he says. “50 Cent was the first of our partners to co-create his own Vitaminwater variety — Formula 50 — delivering the key nutrients he needed in his life. The two mega stars will help decide the winning label design once the field is narrowed to the top 10.”
(Nοt οnƖу wіƖƖ thе winning flavor аnԁ design bе revealed іn December, thе fіnіѕh product wіƖƖ bе sold іn US frοm March 2010 onwards. Furthermore, thе winner wіƖƖ bе аbƖе tο take home up tο $5,000 іn cash.)
Whitestone, N.Y.-based Vitaminwater’s Facebook page already has grown by over 11% just in the past week. Since March, when the page launched, it has grown to more than 400,000 fans. “We wanted to give back to our fans and what better way to do that then to give them control of developing what they are passionate about,” Berniker tells Marketing Daily.
This is mostly a digital word-of-mouth program, via New York-based 360i, which taps into existing Facebook fans, he says. “But, we will be promoting the Vitaminwater flavor generator campaign through online advertising — mostly on Facebook where our passionate fans already exist and also on key sites and blogs that tap directly into the creative types,” Berniker says. “We also plan to launch a digital video next week with some surprise guests talking about the program and how fans can get involved in creating the next Vitaminwater variety.”
Vitaminwater has conducted other promotions and contests in the past with the NCAA and other sports programs. “But this is not just another marketing program to us — this is about giving our fans what they ultimately want, which is real control over product innovation,” Berniker says. “Through the vitaminwater flavor creator we are handing the lab coat over to our fans so they can create what they want and need in their next Vitaminwater flavor.”
Vitaminwater fans will formulate their variety in three steps: 1) flavor, 2) functional benefit and 3) the label design.
In step one, fans can help choose America’s most wanted flavor by logging onto Vitaminwater’s Facebook page at www.facebook.com/vitaminwater and voting for their favorite flavor or flavor combination. Vitaminwater has created a flavor buzz meter that scours flavor conversations on top blogs and Web sites and then ranks flavors based on information gathered from current chatter.
In step two, participants will play a series of games and answer quiz questions to help Vitaminwater assess what functional benefit America really needs. From this data, Vitaminwater scientists will derive a special formula of vitamins and nutrients.
Read more mediapost