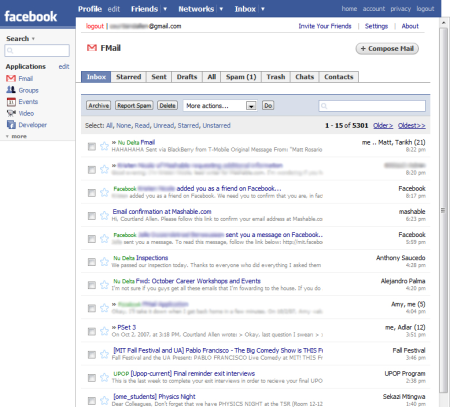 Gmail Killer. Whether Fmail (Facebook Email) will kill Gmail is yet to be known. It’s just a matter of time.
It’s called Project Titan – web based email client. Now, it’s preparing for it’s official launch on this coming Monday, 15th Nov, 2010 during Facebook’s event by invitation only in San Francisco. Users will have their own personal email with xxx@facebook.com as their email address. Awesome.

Users will be spending more time on their Facebook, apart from updating their status, replying messages, uploading photos, they will be spending most of time on Fmail the new email service in Facebook. In the near future, Facebook will probably offer user access to Office Documents via Office Web Apps integration even if they don’t have Office installed on their local device or PC.
If Facebook can create an excellent user experience, this gives them more advantages and profits from increasing numbers of users who will be spending more of their time on Facebook checking mails and thus attracting more advertisers.
With the new feature, Facebook will boasts more than 500 million members around the world by offering a personal email service making most of the established emails provider such as Hotmail, Yahoo! Mail and Gmail panic.
Currently Hotmail has the most users, 361.7 million as of September, followed by Yahoo! with 273.1 million and Gmail with 193.3 million via comScore.
Just by adding this Fmail it creates more social connections and integration. It was a brilliant idea facebook has come up with. Thumbs up for Facebook!
Take a look at Fmail
Fmail, a new Facebook app that lets user check their Gmail from Facebook account. Built on Gmail Lite, all Gmail messages will appear in iFrame within Facebook account. There will be tabs for your mailbox actions such as Inbox, starred items, spam folder, and others. There’s also a button for composing a new email message.

Credit Photo Mashable
Update: Nov 17,2010
We are also providing an @facebook.com email address to every person on Facebook who wants one. Now people can share with friends over email, whether they’re on Facebook or not. To be clear, Messages is not email. There are no subject lines, no cc, no bcc, and you can send a message by hitting the Enter key. We modeled it more closely to chat and reduced the number of things you need to do to send a message. We wanted to make this more like a conversation.
You can request for an invitation to try out http://www.facebook.com/about/messages/


Mark Zuckerberg announced a brand new Facebook Messaging product which is a combination of 3 things
1. Seamless Messaging system – Facebook’s social inbox handles email, but also SMS and IM.
2. Conversation History – the new service will have a single conversation history for all your communication with a person, regardless of whether it comes via email, SMS, IM etc.
3. Social Inbox – Because Facebook knows who your friends are, you can see only messages that are really relevant.

Mark says it’s not email, but email is just a part of it. It’s social messaging which is email + chat + sms, all of which are seamlessly integrated.
Social Inbox is an inbox for filtering the messages you want to see from friends. All Facebook user will have a facebook.com e-mail addresses.
According to Mark, here’s what a modern messaging system should have
Informal, Immediate, Seamless,Personal,Easy,Simple,Minimal, Short
To request for a Facebook Invites, kindly proceed here