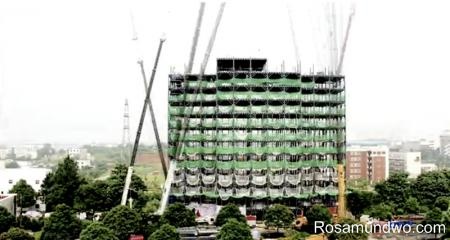 Chinese workers are really hardworking no matter which industry they venture in. In just a matter of 6 days, 15 storey hotel was completed in the south-central Chinese city of Changsha, China.

We heard about earthquake tragedy in china and many people were killed, to deter such mishap. precautions and safety measures were taken in this Ark Project which was built with soundproofed, thermal-insulated structure to withstand a magnitude of 9 earthquake on Richter scale with prefabricated materials. Despite all rushing works, none of these employees suffer injury.
China’s citizen not only are hardworking, in fact they had impressed the world with its economic growth and in Beijing Olympics. Ark project has successfully proven its ability to the world especially to United States.
Must watch time-lapse video of Ark Hotel built in less than a week