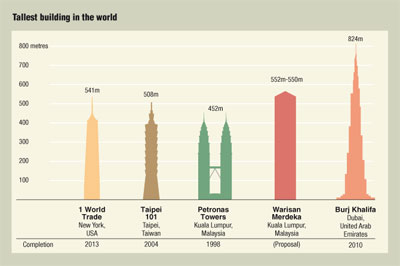 http://www.petitiononline.com/APD100ST/petition.html
Abolish the Proposed Development of 100 Storey Mega Tower in Kuala Lumpur Malaysia Petition
I’ve signed the petition, what about you?

Are you changing your Facebook profile picture tomorrow  on sunday 24/10/2010??

People protest because they care about the issue. And Malaysian protest against building this 100- storey Mega Tower  is because they feel this amount of money are being spend unnecessarily.  Do Malaysian really need taller buildings or better transportations, safer country, cleaner water and environment, better systems and management?
Better transportation refers to organize and punctual schedule, arriving on the dot and with functional bus and trains.
Safer country refers to walking on the streets without the fear of being rob or raped or even kill.
Cleaner water and environment refers to eliminating haze, cleaner drinking water, more trees and so on
Better systems and management refers to efficiency in workers attitude, better salary scheme & technology for bus company to avoid more bus accidents.
There are more things our leader can “change” for his people and country. He can “change” this for a better and safer country and we are proud to have someone who can make our country a better and safer country.
In fact, tourist who visit Malaysia not because of our tallest building, biggest mall but because of our forest, caves, historical sites, our culture, our crafts. Their country are full of buildings, cars, latest tech but what other countries don’t have is “our green forest with orang utan, our caves, our historical places, our culture, our island and most of all the “sun”.
So if Malaysia is going to be so much like foreigner’s country with building everywhere, why do they need to come to our country Malaysia?
And here’s how Malaysian choose to protest in Peace 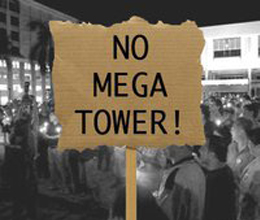 113,510 still counting, Malaysians on Facebook have come out in protest of the proposed Warisan Merdeka tower.
The group called “1M Malaysians Reject 100-storey Mega Tower” was formed earlier this week after the skyscraper was first announced by Prime Minister Najib Tun Razak in Budget 2011.
http://www.facebook.com/NoMegaTower


And here’s the video
This sunday 24/10/2010 are you changing your facebook profile pic? Watch this video !

Do you know about Warisan Merdeka Tower?
Construction work on the 100-storey Warisan Merdeka tower will kick off next year.
The 100-storey tower, which will be developed by the country’s largest fund management company, Permodalan Nasional Bhd (PNB), will cost about RM5 billion. Construction will commence next year, and is expected to be completed by 2015.
Touted to be the country’s tallest when it is completed in 2015, the building will cost RM2.5bil to RM3bil. It will have gross floor space of 3 million sq ft and 2.2 million sq ft of net floor space.
Hamad says the five-star green building will be the “beacon” to create more excitement and attract more interest to the whole development.
This will be followed by two subsequent phases comprising a shopping complex and condominiums. The whole development, to be undertaken over a 10 year period, will cost RM5bil.
Read more articles from FreeMalaysiaToday.com

“Looking forward, it’s unsustainable. The country does not have the money to keep spending the way Dr Mahathir wants us to spend,” he said, pointing out that the national debt had increased from 40 per cent of the GDP to 52 per cent today at RM363 billion.
“We cannot keep spending irresponsibly,” stressed Pua.
Read more
According to minister Datuk Seri Dr Ng Yen Yen said the tourism sector would flourish with the tower as it would attract tourists to Malaysia.

“It will not only be beneficial to the tourism industry, but also for the domestic trade sector.
“Malaysians should take this suggestion positively because this 100-storey tower is for the good of the country,” she told reporters at the MCA elections operation room here today.
“We can build it as we have the capacity for such structures. Look at Shanghai (China), they start with a tower and keep adding more, the same goes for Taipei,” she said.
She added that Malaysia has taken a brave step towards being competitive and the tower will open more windows for domestic trade, as well as attract more foreign investors to occupy the building.

Continue here
Group chief executive Tan Sri Hamad Kama Piah reiterated that PNB could finance the mega development project in the city centre solely from profits that it had made over the past three decades. “We are not taking the government’s money (for the project),” he stressed.

The new tall tower, called Warisan Merdeka, will cost RM2.5 billion to RM3 billion and is expected to be completed by 2015.
Warisan Merdeka will be the world’s second tallest building with a height of 525 to 550 metres, after Burj Khalifa in Dubai, based on the current roster of the world’s skyscrapers. The Burj Khalifa opened in January and stands at 828 metres.
Continue