Today 23/10/2010 at 12 noon i received this letter stuck to my door. Have anyone received this letter before?
This letter states that our meter has been tampered or wire bypass inside the meter and the bill terminal had been touched (di usik). What i don’t understand here is we have been living here since 2008 and TNB only send this letter to us? Curious…
I’ve checked with my previous owner from my condo, she had no idea about this meter tampering or whatsoever.
Great, now who would have guess living here since 2008, now only TNB guy said our meter has been tampered??. Does this make sense to you?

Or is this because our electric bill is extremely low ranging around RM8 – RM15 just because we only use fan, tv, computer? By the way, we don’t have any aircond or water heater and we don’t sleep with fan either.
This letter also stated that they will adjust the bill electric and will forward to us. Does this mean we have to pay the back dated charges? If they ask us to pay then it’s sooo unfair.
I’ve checked the internet, and one guy experienced this problem before:
“where got heard such cases in court wan? I’ve a fren who got caught .. last year. TNB fella changed his meter, informed him that his meter has been tampered (letter put in his letter box) .. Later he received another letter, asking to pay about RM2K .. . TNB backdated the bill to the day my fren first lived at that unit (it’s a condo).. Can request to pay in installment geh … By now .. he has finished his “installment” <> Yeah …. if they wanna catch, should go after the big guys ler …. TNB cases never heard of, but Syabas.. yes .. not so long ago … a company was caught stealing water .. and was charged in the court.”
[Source: http://renotalk.20.forumer.com)
http://www.usj.com.my/bulletin/upload/showthread.php?t=6388
We’re going to contact them on Monday to clarify this issue. 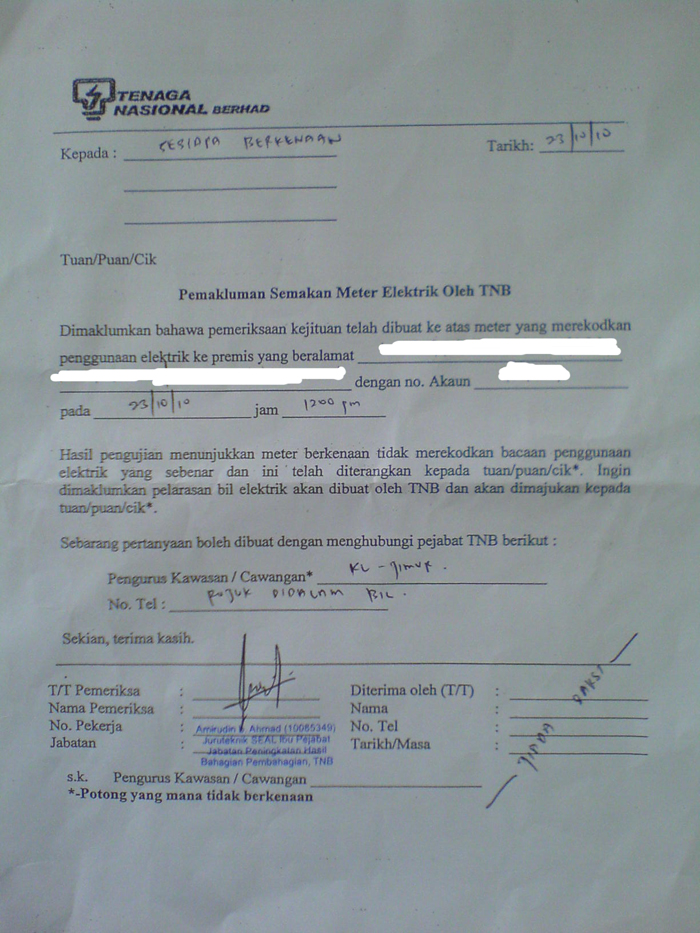 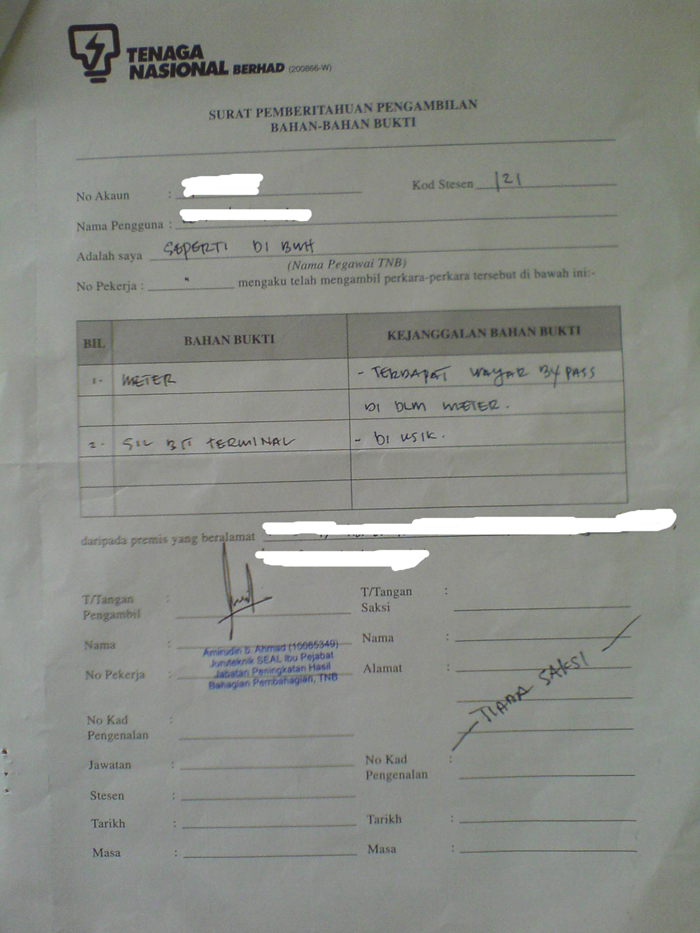 25/10/2010 (Monday)
Call Pn. Salmah from KL Timur TNB 03-41079355 to check with her on this matter
She said we need to wait for letter on adjustment and only then we can make an appeal to them. Although we informed that we have no idea about this bypass wiring.
Do you think it’s fair for them to charge us now for their fault after 7 years (previous owner) and 3 years (2008 since we live here)  of not being able to detect any fault with the meter which is locked in the electric room?
Does this sound fair for us to pay for their inefficiency?
We were told a resident in this block also received such letter.  Anyone could be blame for such reason.. what can we as citizen do? Take the blame and pay for it? Where is justice?
– Contacted the technician in HQ Petaling Jaya and according to him, he’s just doing his duty and informed me that he’ll send his report 1 or 2 days to KL-timur TNB for them to take further action
(5.04 pm)
– We decided to make everything clear black and white by sending AR Registered letters (Acknowledgement of Receipt) to both TNB KL timur and TNB HQ to clear our name. Hopefully, they won’t backdate and ask us for these meter tampering payment which we don’t know exist in the first place.