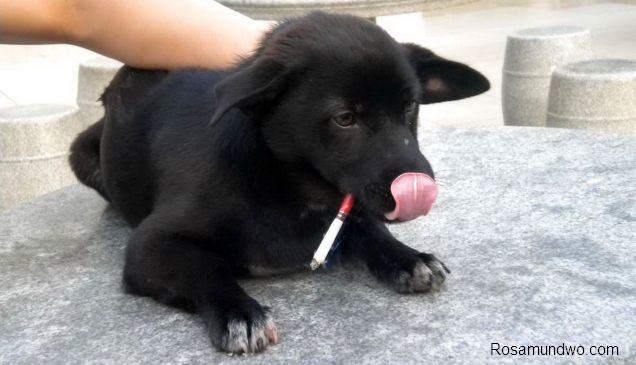 A pet owner in China has been accused of animal cruelty after he taught his new puppy to smoke cigarettes – with the result that the dog now smoke a pack a day.
23-year-old chef Zeng Ziguang said that he thought it would be funny to teach Little Black, his new puppy, to smoke when he bought him six months ago.

He said: ‘At the beginning he hated the smell a lot. Then I trained him to get used to it by puffing the smoke onto his face frequently.’
Zeng, of Wuchang in Hubei Province, central China, used treats of food to train Little Black to put the cigarette in his mouth. Within a month, he says, the puppy was smoking.
‘Now it can smoke a pack a day,’ Zeng boasted.
But other residents of Wuchang haven’t seen the supposedly ‘funny’ side of giving a puppy a deadly addiction, accusing Zeng – fairly reasonably, it has to be said – of being a ‘bad pet owner’.
Source: metro.co.uk

One thought on “Puppy taught to smoke”