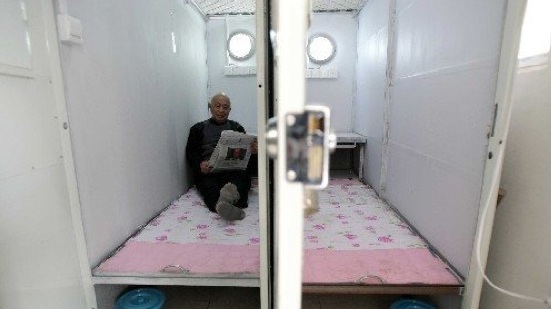 Inspired by Japan’s capsule hotel, Huang Rixin, a retired electricity engineer living in Beijing, built several portable capsule apartments for lease. A capsule apartment is a bit less than 2 square meters, with tv facilities, Internet connection and a small desk. The renting price? 200 to 250 yuan per month or a night in Tokyo’s capsule hotel.
These capsule apartment is less comfortable compared to the well-designed sci-fi space capsule in Japan. The apartment design is horribly designed with it’s  circus cage view; bed is too hard; no air conditioner; and your next door neighbor can hear your snoring sound when you’re asleep. The good thing: The capsule apartments’ residents enjoy enough upward room for standup and large overhead air window, which possibly would make them feel less depressed.
The capsule apartment originally was built for fresh-graduated students seeking for a job. At first no one seem to take notice on this small micro unit apartment which was completed in March this year. However, only a couple of migrant workers showed their interest in it and later they were all driven off after the landlord quoted the rent. It seems that the capsule apartment hasn’t yet copied the popularity of Japan’s capsule hotel.
In early April, the first tenant, 25 year old Zhang Qi, moved into an unit with her entire possessions- a small suitcase. Qi had been in Beijing for the past five years working for an advertising company. After several days most of the people who ‘test lived’ moved out leaving Qi as the only long term tenant there.


“I was not very adjusted on the first day” Zhang Qi said, the insulation was not so good, and all her neighbors were migrant workers so it was very noisy at night. And she did not bring a thick enough blanket, so she was very cold and couldn’t sleep on the first night.


“But I am getting use to it!” Zhang Qi smiled and said while she was unpacking.

Last night she brought over cotton fabrics, wallpapers and scissors etc. happily started detracting her new home.
She first used cotton fabrics as her “ceiling” then put up the wallpapers. “There is a fairy tale world in every girl’s heart” Zhang Qi said, in here she can achieve her Beijing dream.
The only inconvenience Zhang Qi felt is the toilet and shower, she must walk outside from her third floor apartment at night to go to the bathroom, and must go to the bath house for shower. But Zhang Qi felt that she can overcome if others can.
The old man has invested tens of thousands yuan on his capsule apartments. “I don’t care whether it will earn back the money,” said Huang, 78, he just wants to help the disadvantaged. Maybe he should lower the rent if he really doesn’t care about the money. 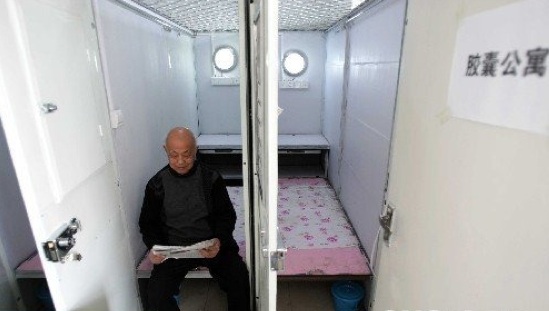 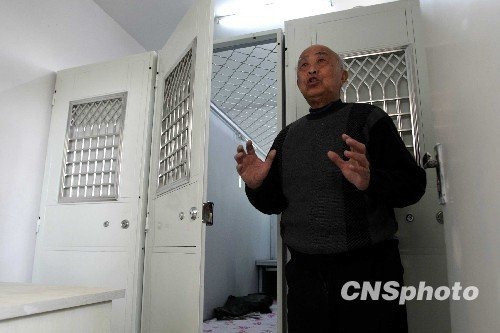