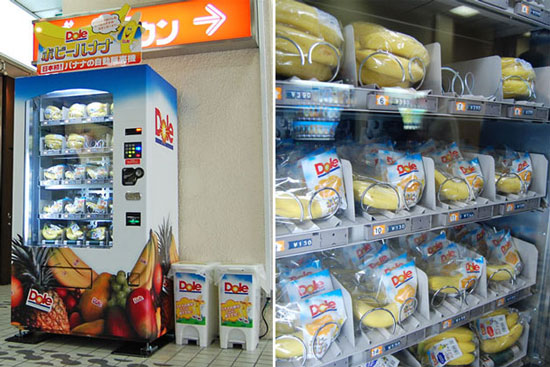 Japan is a place famous for its world vending machines, but this is one ultimately fruits vending machine, the banana vending machine courtesy of Dole.
A banana machine in Tokyo’s trend-setting Shibuya district is growing popular with busy urbanites who crave the fruit as a refreshing breakfast or snack.

The dispenser, installed in an underground area near the 109 fashion complex in late June, sells them for ¥130 apiece or ¥390 a bunch. Despite the premium prices, more than 2,500 have been sold within a month. The makers hope to start selling other fruit in vending machines directly inside offices and universities.
Dole is apparently targeting younger people who live by themselves and don’t eat breakfast properly.
“I think it fits with the times when everything is about speed,” said a representative for the operator, Dole Japan Ltd.
Source: The Japan Times