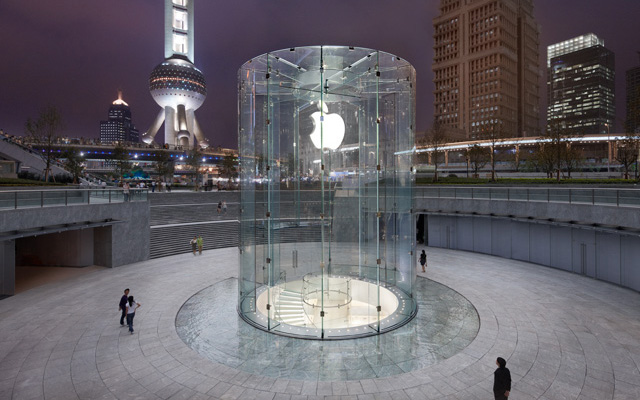 The company will provide consumers 85 Mac computers,100 iPods and 50 iPhones to try out these popular devices.
Their new website for the company’s Pudong Apple store has provided the information about iPhone 4. By providing their email addresses, consumers will be able to subscribe the official latest news of iPhone’s entry into China.
Apple has invited many popular artiste for the ceremony, this include Piano Prince Yundi Li and King of Chinese music Jonathan Lee.
Location of Apple’s store in Shanghai is located in the international financial center of Pudong New District. Architure of Pudong Apple store building is quite similar to Apple’s store in the Fifth Avenue of New York. The 44-meter high building has captured a lot of attention even before the store is opened.
In addition, Apple previously announced they will open 25 retail stores in China by the end of 2012
According to source, Apple was criticized by Lenovo’s Chairman Liu Chuanzhi as not having cared about Chinese market seriously.
“We are lucky Steve Jobs has such a bad temper and doesn’t care about China,” Liu was quoted by the Financial Times as saying. Lenovo, a local PC company, has prepared its LePhone to compete with Apple’s iPhone in China because it is customized for Chinese users, the newspaper cited Liu as saying.

Shanghai has two Ferrari dealerships, two Ritz-Carlton hotels, 120 Starbucks stores, but it was only as of today that China’s wealthiest city got its first Apple store.