Rich with its natural resources, Turkmenistan often mistaken for Uzbekistan is popular with it’s “Door to Hell”. A hole that continuously burning until today since 1971 throughout these 39 years.
Turkmenistan which is a part of the Soviet Union until 1991. And during the ruling of Soviet Russia, back in 1971 when geologists were conducting a gas drilling in Kara-Kum desert, they discovered an underground chamber nearby the village of Darvaza (better known in Turkmen as Derweze, sometimes also referred to as Darvaz). This discovery was an accidental and had resulted a collapse of drilling rig, thus exposing a giant gas crater filled with poisonous gases emitted to the external world. Concentration of gases from this crater was extremely high therefore nobody dare to go under. Someone came with an idea to light the gas in the crater on fire so as to burn it before the poisonous fumes engulf the nearby town of Darvaza. 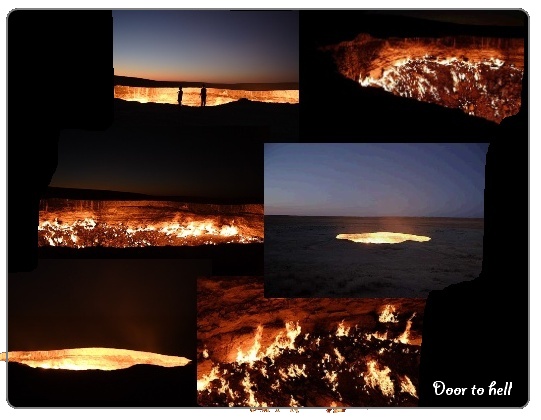 The geologists at first thought the idea of burning the gas was smart and went ahead with lighting the crater on fire. But it turns out, the supply of natural gas below the crater is near infinite and which is why it has been burning ever since. No one can estimate just how much natural gas was burnt throughout these 39 years the crater being on fire. No one can estimate how much more gas still available. When they first lit the gas crater on fire, they thought the fire would go out after a few days. They were wrong, it has been more than a decades and the gas crater is still burning non-stop just like it did when it was first lit. So much natural gas are wasted and the most destructive ones is “Global Warming” issue.
Flaming Crater, Darvaza Turkmenistan