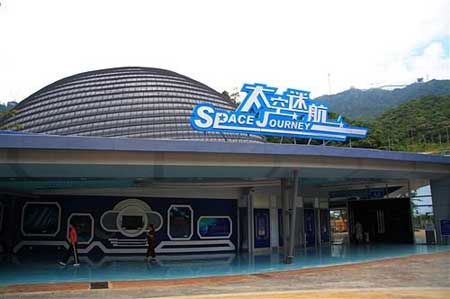 Six people were killed while riding Space Journey ride in an amusement park Ecoventure Valley of Overseas Chinese Town in Shenzhen in China. A ride description posted at the park’s website reads: “By taking an aircraft simulator, you can personally experience the 2G acceleration of gravity in the time of rocket launch. The dome in the diameter of 24 meters vividly reproduces the scenic wonder of the vast universe so that your dream of flying to space appears to come true.”

The indoor ride, called Space Journey, consists of 11 cabins, each with the capacity to hold four passengers.
But something went horribly wrong, leading to the deaths of six people among them two men and four women on the ride and injuries to 10 others.
Most riders were unconscious and rushed to area hospitals once rescue workers broke into the ride and evacuated them.
According to the local reporters in China, several riders were also injured. The passengers on a simulated rocket ride said that the smell of burning electronics and a sudden loss of power preceded the deadly incident at the Overseas Chinese Town East facility in Shenzhen, witnesses told Xinhua news agency.
The Hong Kong-based Ming Pao newspaper said that one of capsule that belongs to “Space Journey” become loose and detached. The capsule fell down and slamming into others and leading to the deaths and at least 10 others being injured.
Witnesses said that there was a loud noise, smoke filled the air, the lights went out, and machine oil started to spray. They said that some of the 44 riders on board were ejected from their cabins, which crashed into each other and fell 40-50 feet to the ground.
There is also a video circulating on the Internet that offers a hypothetical simulation of the disaster.