Yup, it’s a prison break, breaking the walls into pieces.
Gamblers believed fragments of stone from the demolition of pudu jail will bring them luck in winning big lottery.
If it’s true, everybody’s will be rich. And all they care is about “stones”.
It’s ruined and it’s destroyed. Our heritage no longer exist, forever. Our future generation know nothing about our famous Pudu Jail building, especially it’s impressive mural on the wall. It’s gone forever too. (Read about another heritage demolition – “The day Bok House died“)
Whenever my dad drove passed Pudu Jail, i would look at the beautiful mural wall, painting of coconut trees, lush of greeneries, mountains, blue skies….
Who painted this mural?

[Click photo to enlarge]
Dad would replied, a prisoner. But who was that prisoner?
This mural was once awarded the Guinness World of Record for the longest prison mural in the world (384 metres).
Pudu Jail is also notorious for having prisoners in the Japanese invasion of the Malaya peninsula. Soon after World War II, this prison housed common criminals and some were executed there.
This mural is painted by a former inmate Khong Yen Chong in the early 1980s. 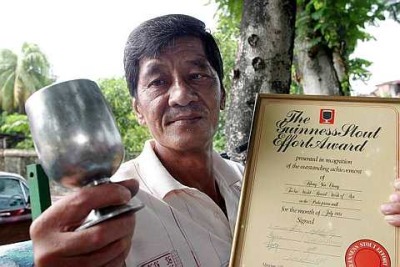 Hard work: Khong Yen Chong showing the award he received for painting the mural when he was an inmate at the prison in the 1980s.
It has since remained a tourist attraction for many years till now.
Pudu Jail shifted to Sungai Buloh Prison
In 1996, Pudu Jail stopped operating and its prisoners were shifted to Sungai Buloh Prison, after the building couldn’t cater for high volume of 6,550 people at that time since 1985.
Future development of Pudu Jail site

In the next 10 years, the site will be developed by UDA for the Bukit Bintang Commercial Centre project which includes a transit centre, apartment, offices, recreation centre, hotel and commercial buildings.
The 83 million ringgit ($A28.5 million) underpass is expected to be completed by late 2012 and construction of the commercial buildings will begin early next year.
Who are the future buyers?
During the 10th Malaysia Plan winding up debate for the Information Communication and Culture Ministry in Dewan Rakyat on Wednesday, Datuk Mohamad Aziz (BN-Sri Gading) questioned why the government was keen to demolish the historic site instead of preserving it as a heritage site.
“If we are always demolishing, how are we going to build our history? What is going to be build at the Pudu Jail site, apartments? Who will want to buy property where thousands have been hanged?

Other country’s preserved prisons
Robben Island – reminder of apartied in S.Africa
Reading jail where Oscar Wilde was imprisoned – still being used today
Alcatraz island which is now a historic site
Pulau Jerejak once had a prison, now is a resort
Facebook

More about Pha Tee and the rest of Pudu Jail’s artists
“Although several people worked on this mural according to Helen Ang who wrote in the NST on April 21, 1994, only one person (Khong Yen Chong) got the recognition for it. This is what she wrote in a blogpost recounting the article:-
Let me share with you something I wrote in NST on April 21, 1994. It’s about ex-convict Pha Tee, the man on crutches with one leg amputated. A former drug addict, Pha had been in and out of jail most of his adult life, serving his first term in 1963 and last released 1990. His daughter recalled she sometimes saw her father painting the Pudu mural when she passed by the prison; “I wished then that I could have stopped and talked to him.”
In the photo, the right side of Pha’s jaw is swollen – “due to an infection which began when a fish bone stuck in his gum. In an attempt to cure the ailment he had extracted several of his teeth, using a string to pull them out”.
Pha earned his living through menial work, scavenging cables and electrical wires from abandoned buildings or collecting scrap metal.
According to Pha, the other artists who worked on the mural – and whom he remembered – were Khong Yen Chong, Cheng Tai Cheng, and Lee Kim Seng.
At the time I interviewed him in 1994, Pha said he’d painted murals on a block of flats in Jalan Pandan, another on a fence in a back lane behind Jalan Talalla, hotel in Perlis and factory in Terengganu.
As for my article headline; Pha said covering the prison walls with scenes from his captive imagination allowed him to remember the jungles and streams from his younger days, and gave him a transient feeling of ‘freedom’. “We worked outside from morning until early afternoon but the guard was always there, and so you always knew you had to go back inside.”
Reference TheStar
Pudu Jail History