Dragon Boat Festival or Tuen Ng is celebrated today 16th June 2010,this special day is for commemorating the death of Qu Yuan, a famous Chinese poet from the kingdom of Chu who lived during the Warring States period. Known for his patriotism, Qu Yuan tried unsuccessfully to warn his king and countrymen against the expansionism of their Qin neighbors. When the Qin Dynasty general Bai Qi took Yingdu, the Chu capital, in 278 BC, Qu Yuan’s grief was so intense that he drowned himself in the Miluo river after penning the Lament for Ying. According to legend, packets of rice were thrown into the river to prevent fish from eating the poet’s body. Another version states that zongzi were given to placate a dragon that lived in the river.
These packet of rice is known as Zongzi or Chinese dumplings, wrapped using lotus leaves with glutinous rice (also called sticky or sweet rice). Filing of these zongzi are salted duck egg, chinese black mushrooms, pork, chestnuts, mung beans and lots more depending on person’s preference in making these zongzi. 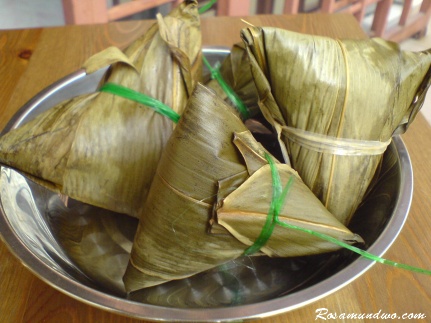 There are many types of zongzi

Some people believe if you make an egg standup during this day, you’ll be lucky for the coming year.