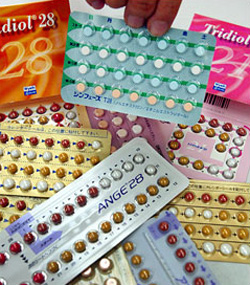 Daily popping birth control pill is what most female does most of their lifetime. Sometimes they forgotten and started to panic, afraid they might be pregnant. When this pill came out in 1960, women are in full control of their own bodies: They no longer have to rely on men to prevent pregnancy.

Fifty years later, women have all kinds of pills and devices to fit their birth control needs. But while they have the freedom to choose what method works best for them, they are still the ones altering their own bodies for the sake of safer sex.
They are the ones taking daily medications or wearing small hormone-releasing gadgets that doctors demonstrate with scary-looking diagrams.
Where’s the prescription for men?
It turns out that scientists around the world are working on more options for men and women to assist with preventing pregnancy; some promising methods are in clinical trials and could fill in some of the gaps in the current contraceptive marketplace

Up to this century, women have all kinds of pills and devices to prevent themselves from getting pregnant. They have the freedom to choose which suits them best. But no matter how best those methods are, women are still the ones altering their own bodies for the sake of safer sex.
Now is the men’s turn..
What took scientist so long to come up with men’s birth control pill?
According to sources, scientists around the world are working on more options for men and women to assist with preventing pregnancy.
“The joke in the field is: The male pill’s been five to 10 years away for the last 30 years,” said Dr. John Amory, researcher at the University of Washington.
Researchers have been promising a male hormonal contraceptive option for a long time, but there are good reasons why it’s so hard to get that technology right. While women make one egg a month, men produce about 1,000 sperm every second, Amory said.
“It proves more difficult to shut down that level of production,” he said.
The female pill uses hormones to make the woman’s brain think she is pregnant and turns off egg production. But men don’t have periods where they turn off sperm production, so it’s harder to get them into that state, he said.
The following two lists contain everything you might want to know about the male birth control pill. One category includes both the various methods of male birth control now in experimentation and their known drawbacks. The second category contains perceptions about male birth control today. The links in this article all lead to various news articles, encyclopedias and more than illustrate and help to explain the options further.

The Methods and Drawbacks

While men have fewer and more drastic choices available to them today, the possibility that a male birth control method is on the horizon is a distinct possibility. Learning about the various methods now may help individuals choose what they would like to do in the future, should the need arise. Men may have more options for birth control in the future than women did in the past.