The new uninterrupted browser, Firefox “Lorentz” beta is out, making the browser more stable when a plugin crashes or freezes in Adobe Flash, Apple Quicktime or Microsoft Silverlight plugins. If a plugin crashes or freezes when using Firefox “Lorentz”, it will not affect the rest of Firefox. Users can submit a plugin crash report, and then reload the page to restart the plugin and try again. It also support both Linux and Windows. (Plugin protection isn’t ready yet in a Mac version of the Lorentz build)
Mozilla Developers encourage users to test Firefox “Lorentz” and provide feedback by filing a bug or filling out this form. To help in the testing of the stability of this new version of beta, users can perform tests by visiting sites that make heavy use of plugins. According to them, users who install Firefox “Lorentz” will eventually be automatically updated to a future version of Firefox 3.6 in which this feature is included.
The news of Firefox Lorentz came soon after the WebKit project announced WebKit2, a new version of the open-sourced layout engine found inside a variety of web browsers, including Google’s Chrome, Apple’s Safari, the Android’s browser, Opera, and Palm’s webOS. Apple is already busy updating Safari with the WebKit2 support, an important move which will enable teh browser to separate each tab in its own process, just like Google’s Chrome.
Before you download, please note that installing Firefox Lorentz will overwrite your existing installation of Firefox. You won’t lose any of your bookmarks or browsing history, but some of your extensions and other add-ons might not work until updates for them are made available. You can reinstall an older version later if you wish to downgrade.
Download
Read more at the Mozilla developer center

The current plan is to have Firefox 3.6.4 code complete by next week, on April 12. By April 14th, Mozilla will most likely dump the codename Lorentz and Firefox 3.6.3 Plugin 1 monikers, and will release the first Beta of Firefox 3.6.4. According to Mozilla’s current schedule, Firefox 3.6.4 Final will ship in approximately a month, on May 4, 2010
Source news.softpedia.com 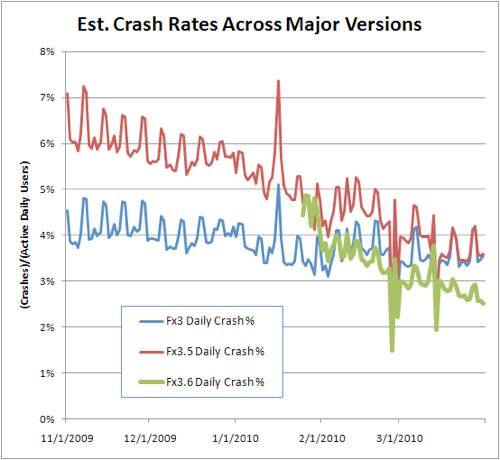 Over the past five months, Firefox has seen a 40% improvement in stability. With the new Firefox Lorentz, numbers  of crashes will drop even more, thus making it more stable.
[Mozilla Metrics Blog via Mozilla Links]