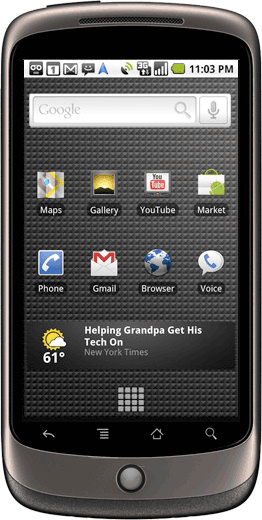 Google’s biggest, most important announcement today isn’t the Nexus One smartphone’s feature set, specifications, or which carrier networks it will work on. It’s Google’s business model that matters.
(Source: http://www.businessinsider.com/the-real-reason-google-is-getting-into-the-mobile-business-2009-12)

Google has finally launched the Nexus One and it’s directly selling to customer through its google.com/phone. However it’s not available in Malaysia. It’s available for a few countries (Hong Kong, Singapore, US, Britain)
Note: Customers in the United States can buy it without service and unlocked for $529. You’ll be able to use the quad-band world phone with any GSM carrier, but it will only support 3G networks used by T-Mobile in the United States.
You can buy Nexus One with T-Mobile service for $179. The handset is unlocked, but you’ll have to sign a T-Mobile contract.
Nexus One prices are only USD$179.99 (about RM626.27), and for an unlocked phone, will cost USD$529.99 (RM1844.37).
Google’s Slick Nexus One Online Storefront Is An Ecommerce Revelation
Our new approach to buying new mobile phone (Posted by Mario Queiroz, VP of Product Management)