Flight delay again?! Argh, what am i suppose to do now?
In Hong Kong, the Airport Authority Hong Kong has installed 14 units of PS3 Game Poles in the Hong Kong International Airport (HKIA) for travellers to use for free.
The implementation is a partnership with Sony Computer Entertainment Hong Kong, the developer of Playstation 3.
The PS3’s feature Uncharted 2, Assassin’s Creed 2, Final Fantasy XIII and James Cameron’s Avatar: The Game. The promotional picture also shows the PS3 sporting Gran Turismo HD Concept.Stationed at various spots, including areas near the boarding gates at Terminal 1 and the Coach Station at Terminal 2, these PS3 Game Poles allow travellers to enjoy themselves while waiting for flights. 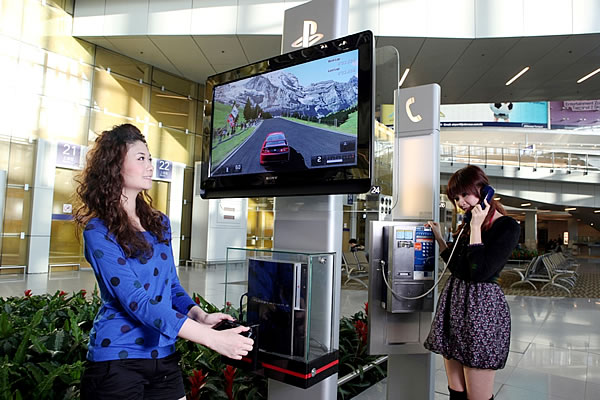