Together we are going to help raise awareness towards the issue of climate change by supporting WWF’s Earth Hour 2010 this year which aim to unite the world’s people to demonstrate their concern about climate change. It will let world leaders know the world is still watching, following the UN Climate Summit in Copenhagen in 2009, and expects them to take urgent action to tackle climate change.

Cop15 – 2009 United Nations Climate Change Conference, commonly known as the Copenhagen Summit, which was held at the Bella Center in Copenhagen, Denmark, between 7 December and 18 December bring us closer to climate change which is currently happening  to our world.
Our Prime Minister Najib Razak at Cop15:

Prime Minster of Malaysia Najib Razak had delivered Malaysia stand to reduce its carbon dioxide emission to 40 per cent by the year 2020 compared to 2005 levels subject to assistance from developed countries.

Conclusion of COP15
For those who doesn’t know what was the conclusion on their negotiation in Cop15, the final conclusion is a history failure. Find out more about it and what can we do to help save our climate? And why they label it as Climate Shame instead of climate change..

The Copenhagen climate summit has ended without the fair, ambitious and legally binding agreement that millions of citizens around the work demanded.  Despite the calls from millions and millions of voices all over the world demanding action and moral leadership. the 120 world leaders gathered for the last two days of the summit were unable to resolve issues blocking the road towards a just outcome. Read more..

We hope in 2010 earth hour, we will be able to reach out to more people around the world, encourage individuals, businesses and governments to switch off lights for just one hour on Saturday 28th March 2010 @ 8.30 pm to convey their support for action on climate change!

Why do we care about climate change? 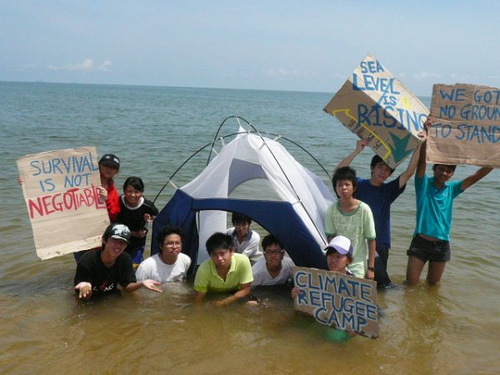 If the global temperature rises, the polar ice caps will melt more. This water will flow into the sea resulting in a sea level rise, flooding the land.”
The islands most frequently mentioned as being at risk are those closest to sea level.
Maldives

“The Maldives is one of the small states. We are not in a position to change the course of events in the world. But what you do or do not do here will greatly influence the fate of my people. It can also change the course of world history.” — Statement by H.E. Maumoon Abdul Gayoom (Maldives) Kyoto, Japan, 3rd Conference of the Parties of the UNFCCC
Source: greenpeace.org

Maldives, for instance—an island nation in the Indian ocean. The highest point in the entire chain of islands is only 2.4 meters (8 feet), and most of the land is much lower. So it doesn’t take much of a change in sea level to wipe out vast amounts of land, and if there’s a bad storm or an unusually high tide, the resulting floods can be devastating—covering the vast majority of the land, fouling fresh water supplies, and wiping out crops. Unfortunately, such floods have been occurring more and more frequently in recent years. The nation’s government has for several years been working on the construction of an artificial island nearby, called Hulhumale, which will be able to serve as a new home for many of the residents if an evacuation becomes necessary.
Tuvalu 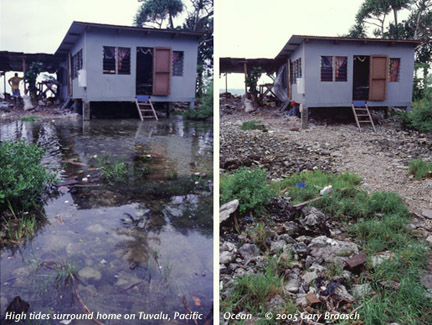 There’s also Tuvalu, in the Pacific ocean between Hawaii and Australia, with a maximum elevation of 4.6 meters (15 feet). Although the nation has fewer than 11,000 citizens, they are sufficiently convinced of its imminent disappearance that they have already begun to evacuate. New Zealand has agreed to grant “environmental refugee” status to 75 Tuvaluans per year, but according to some estimates, the nation may be entirely covered with water in as little as 50 years. Some of the other island nations most seriously at risk are Kiribati, the Marshall Islands, and Tonga.
Bangkok
Bangkok, Gulf of Thailand shoreline likely under water in 50 years. The provinces which will be seriously flooded including Bangkok, Samut Prakan, Samut Sakhon, Samut Songkhram, and Chachoengsao, as well as large expanses of southern Songkhla province, which has a wide area of wetlands.
Other effects of climate change Read Here

Please join millions of people around the world in turning off the lights for Earth Hour to raise awareness and demand action to fight climate change. Grow the movement by sharing this message with your friends and family. Working together, we can overcome one of the greatest challenges facing our planet.
http://www.earthhour.org.my