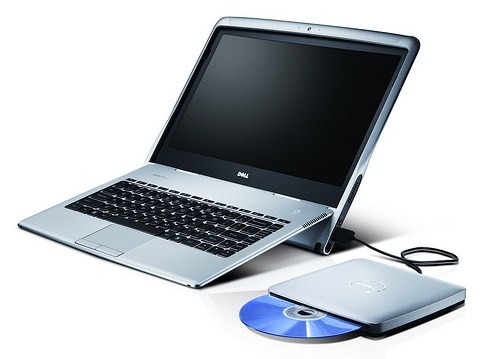 Ultrathin luxury laptop at a scant 9.99 mm, Dell Adamo XPS is the world’s thinnest notebook. This notebook weighs just 1.3kg, although it’s not the lightest and not the fastest laptop in the world.
To open the screen latch of the Adamo notebook,  you have to swipe a finger on a heat-sensitive strip located at the centered on the front edge. When the lid lifts up, it will tilt the screen back and lifting the keyboard on its unusual angle Some might find this angle unusable and uncomfortable. On the positive side, this angle actually enhance cooling! coz the keyboard doesn’t hinge at the corner. Instead it hinges further up, allowing for plenty of airflow when open.
Apart from that you need to use one hand to lift the lid and halfway it requires you to hold it down with your other hand. Troublesome eh?
The Adamo definitely is sleek looking and it’s light enough to carry everywhere with you,considering the size of the screen, about two inches bigger in both directions than a sheet of paper and only 3.2 lbs, you could almost forget you were carrying this thing around
The machine’s tiny frame houses a 13.4in widescreen, a full-sized keyboard and a touchpad that supports multi-touch.
The notebook, which is powered by an Intel Core 2 Duo (1.4Ghz) ULV processor, has 4GB DDR3 RAM and a 128GB SSD (solid-state drive).
Downside of Adamo XPS are  – Ethernet socket as well as an optical drive, both of which are offered as external devices.
It runs on Windows 7 Home Premium (64-bit).
The Adamo XPS retails for RM6,799.

Winner: Adamo.
2) The world’s thinnest laptop
Apple has a little wiggle room to hold onto bragging rights thanks to the MacBook Air’s tapered design, which goes from 0.4 cm (0.16 inches) at the leading edge to 1.94 cm (0.76 inches) at the rear.
Adamo’s consistent height from front to back gives it a profile of 1.64 cm (0.65 inches) – so while Adamo is noticeably thicker at the front, it’s thinner than the MacBook Air when overall width is taken into account.

Winner: Adamo (but we’ll allow that the MacBook Air’s slivered shape could make it feel thinner).
3) The world’s lightest laptop
MacBook Air, which barely nudges the scales at 1.36 kg (3 pounds). At 1.81 kg (4 pounds) the Adamo has bugger-all body fat, and just like the MacBook Air it’ll often make you stop and wonder if you remembered to put your laptop in your bag.
The Adamo also has a slightly larger footprint than the MacBook Air – it’s 33 cm (13.4 inches) wide by 24.1 cm (9.5 inches) deep, against the MacBook Air’s 32.5 cm (12.8 inches) and 22.7 cm (8.94 inches).
Winner: MacBook Air.
4) Performance
Both the Adamo and MacBook Air are fitted with the latest 45nm Penryn-class Core 2 Duo processors, the MacBook Air has the meatier powerplant in Intel’s low-voltage SL series, with a choice between 1.6GHz (SL9300) and 1.8GHz (SL9400).
Dell opted for the less power-hungry but equally less powerful ultra-low voltage Core 2 Duo SU, running at 1.2GHz (SU9300) or 1.4GHz (SU9400).
In other words: Both the Adamo and MacBook Air have Intel’s small package Core 2 Duo inside,
however Apple chose a much faster version of the pint-size Penryn processor
And there’s much more to this than clock speed: the MacBook Air’s SL chips are packed with 6MB of cache and run through a 1066MHz front size bus, giving them a clear edge over the 3MB cache and 800MHz bus of the parsimonious SU processors
For graphics, Adamo relies on Intel’s embedded GMA X4500HD engine while Apple favours NVIDIA’s GeForce 9400M graphics processor.
The Adamo wins back a point for being able to take 4GB of RAM whereas the MacBook Air is stuck on 2GB, but the MacBook Air still has more muscle to begin with.
Winner: MacBook Air.
5) Battery
It’s also worth noting that the batteries of both the Adamo and MacBook Air are sealed into the chassis rather than be replaceable by the end-user.
Winner: This one’s a tie.
Read more

Which one would u purchase?……….
People comments over net:

“Hi! I just found out Adamo in latin mean “fall in love” …. but I aint falling in love with adamo yet man.”
“The design very attractive, however for a price at almost 10K and with such a lousy spec, obviously the person who buy this gadget is the dell’s fan. Any reason should one purchase Dell instead of mac or hp envy?”
“Actually the specs of adamo is not that outstanding compared to laptops by other brands. You can get a laptop with much better specs at a much lower price. The exclusive design and good appearance is the main contributors to the high price though.”